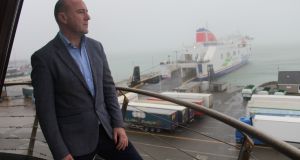 Rosslare Europort is in advanced talks with a shipping company to start a direct ferry service to continental Europe for hauliers looking to avoid any post-Brexit congestion on the UK landbridge.

The southeast port, the closest Irish port to mainland Europe, is in discussions with a new shipping line to start a six-days-a-week service before the transition period ends on December 31st.

Concerns about possible congestion at the Port of Dover from next year has led to calls from the haulage industry to establish a frequent ferry service direct to northern continental Europe.

These calls have intensified with warnings from the UK government that there could be delays of two days with queues of 7,000 lorries in Dover in a scenario where the EU and UK fail to agree a trade agreement to reduce border checks once the transition period ends.

Glenn Carr, general manager of Rosslare Europe, said there may be capacity on the existing direct routes but hauliers want certainty and frequency beyond a three-days-a-week service.

“There are not great options for the haulier, for the manufacturer, for the exporter, for the importer. There needs to be more choice,” said Mr Carr.

“While there might be capacity there it is the frequency and sailing time and speed of sailing time that is critical. We need a frequent fast service to mainland Europe, and I am very hopeful that that is what we are going to deliver.”

He estimates that between 40,000 and 50,000 of the 150,000 to 170,000 lorry journeys a year crossing the UK landbridge to continental Europe – with two ferry services, across the Irish Sea and the English channel – could transfer to direct ferry services if post-Brexit border checks cause delays.

The landbridge remains the cheapest and quickest route to continental Europe for Irish importers and exporters, but the prospect of two-day delays and long queues of trucks at Dover, a key crossing point for Irish transport companies, creates uncertainty for time-sensitive deliveries.

It takes 20 hours to reach continental Europe over the landbridge, but Mr Carr believes that the new six-days-a-week, roll-on, roll-off ferry service can make it to northern France in a similar time.

Hauliers want a regular direct service to the French port of Le Havre or further along France’s coast to Calais or Dunkirk to put them directly on to main road networks into France, Belgium and The Netherlands to guarantee continued fast access to Europe if the UK becomes congested.

Mr Carr said he hoped the new service would be in place by the time the transition period ends, when the UK faces border checks after leaving the EU single market and customs union.

“It can take a little bit of time to put a new service in place. Waiting to turn it on in January could result in a further lead-in time to turn it all on,” he said.

Ciarán O’Driscoll, a policy and Brexit research officer at European Movement Ireland who has studied transit routes, said he expected shipping lines to wait until the weeks and months after Brexit comes into effect before adding capacity on existing direct routes in a no-deal scenario.

“The only situation where you would see an increase in the frequency of sailings from Ireland to the likes of France, Belgium or the Netherlands is if the landbridge becomes untenable during those initial few months after a no-deal,” he said.