Rose of Tralee Elysha Brennan the only one still in shock

Ronan McGreevy meets Maria Walsh on her last day as the Rose of Tralee and the new holder of the tiara, Elysha Brennan. Video: Ronan McGreevy 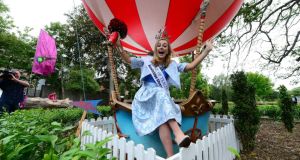 The new Rose of Tralee Elysha Brennan (22) insists she will be her own woman.

She admits there was an “ongoing joke” among the other Roses that they should just give the tiara to the previous incumbent Maria Walsh for another year, given the impact she has made.

“I’m not the next Maria Walsh, I’m the new Elysha Brennan,” she says emphatically.

A “self-confessed Panto child”, she credits her self-confidence to being in pantomime and learning to dance from an early age.

Dance showed her how to walk into a room, hold herself confidently and look the world in the eye. She says she’s the “work hard, play hard” type, the first on the dance floor and the last to leave, but also a swot come exam times.

She will need that self-confidence as she embarks on a year of engagements as the Rose of Tralee. Ms Brennan, the Meath Rose, is the first winner from an Irish centre in seven years. This will at least make it easier for her to fulfill her engagements in Ireland.

When the shock of her win subsides, she will have to decide whether or not to defer her third year of studies as a medical student in the Royal College of Surgeons in Ireland (RCSI).

“I’m not making any huge decisions yet. My college has been supportive thus far, so watch this space.”

She joked that her boyfriend for the last three years has been her medical studies and 12 hour days are the norm during exam times.

The most compelling part of her story has been her recovery from cancer when she was 19.

Diagnosed with Hodgkins Lymphoma before her repeat Leaving Certificate exams, she did them anyway before embarking on a harrowing chemotherapy and radiation therapy programme afterwards.

She was persuaded by her aunt Ciara to enter the Rose of Tralee, and it went on her “bucket list” of things to do.

“I was in a very low and vulnerable place at that moment in time. It was the summer I was sick.

“She said, ‘what’s going to be more of a powerful message than you standing on the stage in the Dome?’

“That was even before I filled out the application form.”

Like most women who enter the competition, her ambition was to reach the international final in Tralee. She says she never thought about winning despite being the strongest of strong favourites with the bookies.

She does not want to become known as the “cancer Rose”, although she wants to write a book about her experiences to help others struggling with the disease.

“Cancer is a part of me but not all of me. I know a lot of people focus on the cancer end of things and it is important to honour it and not be flippant about it. It is something that needs to be spoken about and people who are going through it, or have a family members who are, and can take something from it,” she says.

Some 760,300 viewers watched her being crowned the 2015 Rose of Tralee. The two-night show remains a big ratings winner for RTÉ, though not as big as in previous years.

The average number of viewers who watched the second half of the final night was 652,300, the lowest figure for more than a decade. In 2010, average ratings peaked at 916,000.

Many, though, have migrated to watching the whole show or part of it on the RTÉ Player.

Twitter stated that some 52,000 tweets using the hashtag #roseoftralee were sent during the two days of the festival and it trended worldwide on both nights.

Love it or loathe it, the Rose of Tralee festival is unlikely to die of indifference any time soon.