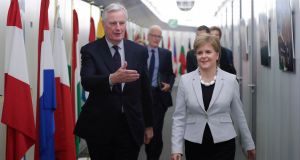 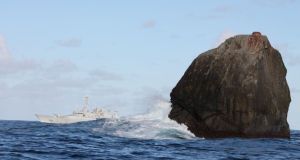 Scotland’s first minister Nicola Sturgeon has defended Scottish threats to Irish fishing boats around Rockall as “in line with our obligations to uphold international law”.

Asked if that meant arrests of fishermen, Ms Sturgeon replied: “We don’t want it to come to that”.

She called for an “amicable and negotiated settlement” to the dispute, stressing her desire to maintain good relations with the Irish Government.

The row erupted last week after Scotland threatened action if Irish vessels continue to fish in the 12-mile (19km) zone around Rockall, an outcrop in the North Atlantic.

The Scottish government said it is defending the interests of its fisheries against “illegal activity” around the uninhabited islet, over which the UK claims sovereignty.

The Irish Government does not recognise this claim over the disputed territory located around 386kms from the Scottish mainland, and Irish fishermen said they have no intention of leaving the disputed waters.

In a formal letter of notice last week, Scottish external affairs minister Fiona Hyslop warned the Irish Government that it will deploy its vessels to protect Scottish fishing rights around Rockalll.

Irish sources have played down the row, expressing confidence it will not escalate and was unlikely to end up in the courts.

Sources said it was seen as a domestic play by the Scottish National Party to raise its profile in Brexit-supporting fishing communities.

A spokesman for the European Commission would not be drawn on the Common Fisheries Policy implications of the dispute.

He said the issue was very complicated legally, as much about sovereignty as fisheries, and hoped the two parties would resolve it amicably through discussion.

Brussels has not yet received a complaint from Ireland.

Speaking at a Brussels thinktank on Tuesday Ms Sturgeon insisted “Scotland’s relationship with Ireland is very strong, stronger than it’s ever been, a relationship we highly value. And I was in Dublin with the Taoiseach a couple of weeks ago.

“We want to see an amicable and negotiated settlement to this issue around fishing in Rockall, and we’ve been raising issues over the past couple of years with the Irish Government about what we consider illegal fishing in the 12-mile zone around Rockall.

“Those discussions haven’t so far led to an agreement,” she said arguing that they had therefore acted “in line with our obligations to uphold international law” but “want to reach an negotiated settlement.”