Risk of chocolate poisoning in dogs peaks at Christmas

Owners warned chocolate can cause vomiting and seizures in dogs 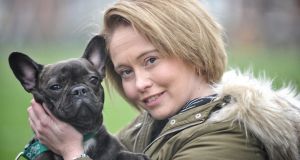 Suzanna Dixon with her French bulldog puppy, Narla, who nearly died from eating a box of chocolates. Photograph: PDSA/PA

The risk of chocolate poisoning in dogs peaks at Christmas, new research has found, as their owners are urged to keep festive treats away from their pets.

Chocolate contains theobromine, a stimulant similar to caffeine, that can cause vomiting, increased heart rate, agitation and seizures in dogs.

Researchers at the University of Liverpool analysed records from 229 UK veterinary practices between 2012 and 2017 for consultations relating to chocolate exposure around Christmas, Easter, Valentine’s Day and Halloween.

Chocolate exposure was less common in older dogs (aged four to eight years or more) than dogs under four years of age. No particular breed was associated with an increased risk.

While chocolate doses were often small, exceptions included eating a garden of Easter eggs hidden for a large party of children.

“Here we describe significant peaks of chocolate intoxication, most notably at Christmas and to a lesser extent Easter presumably reflecting the enhanced availability of seasonally-related chocolate such as Easter eggs, chocolate Santa figurines and Christmas tree decorations, possibly in the hands of younger members of society,” the authors wrote.

They concluded that chocolate ingestion has a unique seasonal pattern “which merits highlighting this risk to clients, particularly in the run up to Christmas and Easter as chocolate becomes more accessible within the household.”

After taking account of potentially influential factors such as dog’s age, gender and breed, 386 cases from 375 individual animals were included.

Neurological signs such as agitation and restlessness were uncommon (three per cent) and seizures were not reported in any cases. None of the clinical signs seen were considered life-threatening.

Last December, puppy Narla, who was nine months old at the time, nearly died after eating a box of liqueur chocolates from under the Christmas tree, the UK animal charity PDSA said. She was rushed to Blackpool PDSA pet hospital where she received life-saving treatment.

Vet Terry Ogdin said it was estimated Narla had eaten around 200g of chocolate, which is an extremely dangerous amount for a dog of her size. “Thankfully she was brought in very quickly and we were able to treat her before the chocolate had a chance to digest.”

Owner Suzanna Dixon (32), from Blackpool, said: “Not only did Narla eat a huge amount of chocolate, but they were also liqueur ones so the alcohol made it even worse. “There won’t be any chocolates under the Christmas tree this year and I’d urge others to ensure they don’t leave any chocolate within easy reach.”

The study is published in full in the Vet Record.