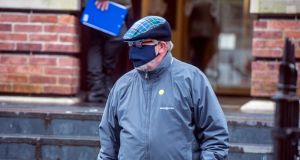 A former Scout leader has been released on bail after he was charged with 27 sexual offences relating to the alleged abuse of boy scouts in Cork.

At Cork District Court, David Barry (72) faced a total of 26 counts of indecent or sexual assault and one count of attempted indecent assault.

Det Garda Gary Duggan of Bishopstown Garda station gave evidence of arrest, charge and caution. He said he arrested Mr Barry at his home at Montrose, Firgrove Gardens in Bishopstown at 7.40am.

He brought him to Togher Garda station where he formally charged him with offences at 8.10am.

Det Garda Duggan told the court that when he asked Mr Barry if he had anything to say in reply to the charges, he replied: “No, I don’t - I am so sorry for anyone I hurt.”

The charges allege that Mr Barry either indecently or sexually assaulted eight boys and attempted to indecently assault an ninth boy at an address in Cork on various dates between 1986 and 2005.

The boys - who were all members of the Catholic Boys Scouts of Ireland at the time - were aged between 12 and 16 at the time of the alleged offences.

Det Garda Duggan said gardaí had no objection to Mr Barry obtaining bail on condition that he sign on once a week at Togher Garda station and surrender his passport.

Sgt Gearoid Davis said the DPP had directed that the matter should be tried on indictment before a judge and jury at circuit court level and he applied for a six week adjournment to January 27th.

Det Garda Duggan said he would be in a position to serve the book of evidence on that date and Judge Olann Kelleher released Mr Barry on bail, to appear in court on January 27th.

Mr O’Donnabháin applied for a ban on identification of his client, who is a former Scout troop leader, in media reporting but Judge Kelleher refused and said the only order he would make was not identifying the injured parties.

Mr O’Donnabháin said his client was a retired businessman and he would prepare a statement of means in due course in support of a future application for free legal aid.