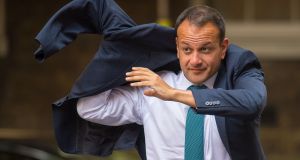 Taoiseach Leo Varadkar: he is central to the greatest constitutional and existential question the UK has faced in generations. Photograph: Dominic Lipinski/PA

You do not have to be overly perceptive to notice that the right-wing British press has a thing against Leo Varadkar. He’s demonised as a lackey of the European Union, and the obstacle between Britain and the so-called green pastures of Brexit.

The disdain is unmistakable. Headline-dominating insults range from “naive” to “ill-informed” to “arrogant”, and everything in between. Simon Heffer wrote in the Telegraph that Varadkar was “wrong to disregard the ancient ties between Britain and Ireland”; commentator Ruth Dudley Edwards called him a “useful idiot”; and a Sun editorial said his attempts to “wreck Brexit have been a suicidal failure of statesmanship”.

Theresa May’s former chief of staff, Nick Timothy, wrote in the Telegraph that Varadkar “doesn’t understand the Good Friday [Belfast] Agreement” and commentator Tom Harris claimed in the same paper that he “is not up to the task when it comes to Brexit”.

It would be easy to dismiss this invective as anti-Irish. It parrots the tropes of 19th-century Punch cartoons: ignorant, small minded, a man who doesn’t know How Things Really Work.

But that would be missing the point. The hostility borne towards Varadkar comes from a different place entirely – an ignorance of Ireland’s political culture, and a starkly different perspective on what the EU is and what it is for. This comes down to an asymmetry in information. In Ireland, the UK press is read widely; in the UK, most people would struggle to name a single Irish publication. Until very recently, the man on the Clapham omnibus wouldn’t know what – let alone who – the Taoiseach was. But Brexit and Ireland’s central role in the negotiations has plastered Varadkar over the front pages of broadsheets and tabloids alike.

The UK is in a bind, trussed up by Boris Johnson’s red lines, and only Varadkar can help

Varadkar is now widely known. But he represents a departure from what the UK expects from an Irish politician. He is not a charming west-of-Ireland rogue like Enda Kenny, nor a wily and gregarious Dublin fixer like Bertie Ahern. Both were widely liked; or at worst, treated with relative indifference. And where the UK press was so fond of Kenny – who navigated “the EU corridors of power” with style, as Dudley Edwards puts it – they are full of criticism for the “naive” and “inexperienced” Varadkar.

In Britain, Kenny and Ahern were recognisable from the small stock of Irish characters that populate the British imagination. Varadkar speaks in a clipped D4 accent, not the lilting brogue of his predecessor. He is direct – often to a fault – and hard to please. He doesn’t have an Irish surname. That he is gay and half-Indian matters too.

But it is not just the personal attributes that ground the right-wing media’s suspicion. Varadkar – both by accident and design – has found himself central to the greatest constitutional and existential question the UK has faced in generations. In 2019, Ireland is calling many of the shots. It has been a long time, perhaps not since Éamon de Valera, that an Irish leader has had a protracted period of prominence in the UK media. The UK is in a bind, trussed up by Boris Johnson’s red lines, and only Varadkar can help.

This UK isn’t used to this. The Taoiseach and British prime minister are at least nominal equals in the European Council. Ireland for the first time is able to act on equal terms to its larger and more powerful neighbour. This has allowed Ireland to divest its hang-ups, or “inferiority complex” that Dudley Edwards talks of. But the open hostility to Varadkar and Ireland’s negotiating position illustrates a UK that hasn’t gone through the same psychological process – uneasy with a development they see granting the Taoiseach power above his station.

The Tory Party tries to confect narratives of an outward-looking, tolerant and global Britain, at ease with itself in the comity of nations

The rebalancing is a shock. The view of the right-wing commentator is that Varadkar is a pawn – an Irish leader who is too stupid to realise that his value is as a tool of the EU, there to punish Britain only to be thrown under the bus later. Simon Heffer wrote in the Telegraph last month that Varadkar and Simon Coveney “reaffirmed their desire to be weaponised by Brussels”. Dudley Edwards wrote that the commission likes him, because “they recognise a useful idiot when they see one”.

Where the UK see a plot, designed in Brussels and executed via Dublin, to kill any success Brexit might have, Ireland and the EU27 see the EU doing its job. There is a misalignment in how the bloc and its institutions are perceived. In Dublin, the purpose of the EU is seen, through solidarity and a single market, to amplify the voice and maximise the power of otherwise small countries. But in the UK, the prevailing narrative – even among Remainers – is that the EU inhibits British power. There is hostility towards Varadkar because he represents everything the UK doesn’t like about the European Union – and the reasons why it voted to leave in the first place.

As the Tory Party, aided by the press, tries to confect narratives of an outward-looking, tolerant and global Britain, at ease with itself in the comity of nations, perhaps it doesn’t realise that Ireland has got there first. It’s not Varadkar they dislike, but the new political reality.

Finn McRedmond is a journalist based in Westminster