Students who occupied a building in Trinity College Dublin have announced an end to the protest that began on Tuesday over the introduction of supplemental fees. 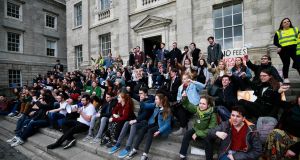 The students are demanding that proposed supplemental examination fees be scrapped; affordable rental options be introduced and that student fees not be increased. Photograph: Nick Bradshaw

Students who occupied a building in Trinity College Dublin have announced an end to the protest that began earlier this week over the introduction of supplemental fees.

The occupation, which started in the Dining Hall building in the university’s Front Square on Tuesday morning, was in protest at the introduction of a new fee structure for supplemental examinations.

In a statement issued on Thursday, students said they would vacate the building ahead of a rally in the college at 1pm.

The statement came after Provost Patrick Prendergast issued a tweet saying the college’s governing authority would consider alternative proposals at the next meeting of the board. On Wednesday evening, security staff at the university entered the Dining Hall in a bid to prevent more students from accessing the occupied building.

“The current occupation comes to an end after escalated action from the College yesterday evening which left students inside the building without access to bathroom facilities and no food or water allowed in,” the statement continued.

Agreed with @tcdsu & @trinityGSU that​ we will seriously consider alternative proposals on supplemental exam fees, modular billing & PG/Non-EU fees at the next Board meeting, and that Trinity is a university that belongs to all of us who study and work here #TakeBackTrinity

Students have now occupied the iconic Exam Hall in Front Square as part of the #TakeBackTrinity campaign. No to supplemental fees. #OccupyTCD pic.twitter.com/AvqKnwWiOH

The students said their campaign would continue. “However, we plan to continue our direct actions until our three demands have been met. We will continue to escalate our protests until our demands our met,” they said.

A statement issued by the college confirmed that the university’s management “has undertaken to consider alternative proposals on supplemental exam fees, modular billing and postgraduate/non EU fees” at the next meeting of the board.

“There has been good dialogue over the past few days and we now have an agreement between students and university management. This will see the protests winding down. The university is now looking forward to renewing student partnership in the coming days and weeks,” Vice-Provost Chris Morash said.

The demands of the ‘Take Back Trinity’campaign include the scrapping of proposed supplemental examination fees; the introduction of affordable rental options for students and that student fees not be increased.

The students said the tweet posted by Provost Patrick Prendergast on Wednesday evening in which he said the college would “carefully consider” alternative proposals at the next board meeting was “a step forward”.

Security staff entered the building just before 5pm on Wednesday evening and barred students from entering the building. The university said it was concerned that large numbers of non-students had been invited into the building and the increased numbers could result in “unacceptable risks for all concerned”.

A number of locations around the college, including the Examination Hall, were briefly occupied in response after students accused college authorities of refusing protesters access to food and water.

Students said they had been warned that any attempt to open certain internal doors would trip an alarm that would alert a garda emergency response team.