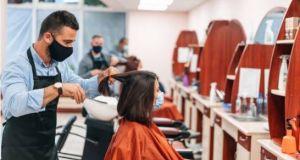 Taoiseach Micheál Martin: “So if you think of personal services like barbers and hairdressers where people are, up close even with your PPE and all that, there’s a higher risk. Public health are advising us that they want to be very cautious.” File photograph: Getty

Taoiseach Micheál Martin has defended the Government’s decision to keep hairdressers and barber shops closed while allowing construction to continue on important housing projects, saying the move was very much due to risks posed by the new UK variant of Covid-19.

Mr Martin said public health experts were very concerned about the spread of the UK variant, which is now accounting for 70 per cent of all new cases in the Republic, and given its greater transmissibility, opening personal services such as barbers and hairdressers increased the risk of spread.

“I think construction has been good in terms of their protocols and so has the personal services sector, but the variant is the issue – you have to be much more careful with the variant – it does transmit much more easily,” said Mr Martin.

“So if you think of personal services like barbers and hairdressers where people are, up close even with your PPE and all that, there’s a higher risk. Public health are advising us that they want to be very cautious.”

Mr Martin made his comments in Cork as British government scientists were reported as increasingly finding the UK variant, known as B.1.1.7., to be linked to a higher risk of death than other Covid variants.

According to the New York Times, British scientists said last month there was a “realistic possibility” that the variant was not only more contagious than others, but also more lethal.

The British government did not publicly announce the updated findings but posted the document on a government website on Friday and scientific advisers to that administration said on Saturday the new findings laid bare the dangers of countries easing restrictions as the variant takes hold.

According to The New York Times, the variant has spread to at least 82 countries, and is being transmitted 35-45 per cent more easily than other variants in the United States. US officials have suggested the UK variant could be the dominant source of infection there by March.

Meanwhile Mr Martin predicted that Level 5 type restrictions are likely to continue in the Republic after March 5th, but said the Government planned to extend supports for those affected by lockdown measures, particularly those in the hospitality sector.

“I don’t right now have a date [to reopen] to be honest with you I think we would have to have a critical mass of the population vaccinated ... business supports will continue; we will not be pulling the rug from any of those supports, there will be no cliff-edge in relation to the supports.

“That is part of the response to Covid-19 and we discussed it at an economic Cabinet sub-committee last week. We had €5.5 billion prepared as a contingency fund for Covid-19 – we did not anticipate we would be using it so quickly in the first number of months of this year but, as it transpired, we are.”