RAF colleagues shot down over Cologne reunite 70 years on 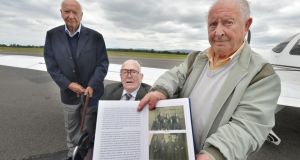 Arthur Nicholson remembers the desperate circumstances in which he last saw his fellow RAF crew-member Denis Murnane 70 years ago. Murnane was disappearing out of the escape hatch of their bomber plane that was on fire after being hit by anti-aircraft shells over Cologne in 1945.

They reminisced about their escape when Nicholson (90), the flight engineer on board, and navigator Gerry Chugg (92) came to Ireland this week to meet Murnane (94), a Dublin man.

Nicholson from Yorkshire and Welshman Chugg flew from Cardiff to Weston airport in Leixlip for the session.

“It was the first time we ever did a daylight raid, and as soon as we took off I thought ‘we’re not going to come back from this’,” Murnane said.

The three were in their early 20s at the time and and had been sent on a bombing run over the German city. As they approached Cologne, Murnane says he couldn’t see what there was left to bomb. “The place was in a complete wreck.”

Their Halifax bomber plane had changed course and become separated from the other units. They suffered heavy shelling from the Germans and made the decision to escape as their engines caught fire.

“We got the orders ‘parachute, parachute, bail out’,” Murnane remembers.

He strapped on his parachute and jumped out, before realising the cord had been cut by shrapnel that had shot through the plane. He had to take off three pairs of gloves and open the parachute manually while falling through the air.

He landed in a tree and says that when he reached the ground he began to laugh. “I suddenly realised I’d climbed down from a tree that I’d never have climbed up”.

The last time he was at Weston airport, he was eight years old and receiving flying lessons. He later trained to be a pilot but changed his mind after a bad crash while training in Canada. He became a bomb-aimer despite the risk – he says 80 per cent of crew in bomber command were killed.

The three men still call each other by their nicknames. Murnane was always “Paddy”. The Welshman Gerry was “Taffy”, and Nicholson was “Nic”.

Murnane was caught by German soldiers on the ground. One of the Germans spoke excellent English. “When I asked him where he’d learned, he said he’d been a prisoner of war in the Curragh in the first World War”.

Six of the seven crew in the plane above Cologne survived and were arrested separately. The 30-year-old English pilot, Stanley Eastwell, died and is buried in in a military graveyard in Belgium.

“He had plenty of time to get out,” Murnane believes. “But I think the reason he didn’t come out was that he was a Jew and he was afraid of what the Germans would do if they discovered that.

They were sent to Frankfurt to a prison centre and interrogated by a German officer. “He asked me ‘how long have you been a soldier?’ I said ‘I haven’t been a soldier, I’ve been an airman,’ and he just smiled”.

Murnane was reported missing, believed to have been killed in action. “My family were amazed when I sent a telegram to tell them I was alive. I got engaged before the war, but I said I wouldn’t get married until the war was over because I didn’t want to leave a widow or any children behind.”

He has been married to his war-time fiancee since 1947. Post-war, he worked with an optician in Dublin, before running a hotel in Skibbereen, Co Cork, in the 1950s until he retired.

Nicholson was the last man to make it out of the burning plane alive. “We were fortunate it was nearly the end of the war,” he says.

“You were just dangling down on a bit of string and you were worried about what was going to happen then or who you were going to meet.”