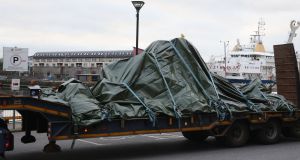 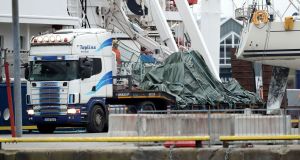 The section of the Sikorsky S-92 which was raised by a west Cork salvage company and Naval Service divers from the seabed off north Mayo on Sunday was landed into Galway by the Irish Lights ship Granuaile early on Wednesday morning.

The section, which was covered in tarpaulin, was taken by truck shortly after 7am to the AAIU’s facility in Gormanston for examination as part of the official investigation. It includes the helicopter’s rotor head, main gear box and one engine.

The AAIU’s preliminary report into the crash, which occurred in the early hours of March 14th off Blackrock island, 13km west of north Mayo, will be issued within several weeks.

The AAIU has already ruled out mechanical fault in its initial analysis of the helicopter’s “black box” data.

The Irish Coast Guard says it is extending shore checks on a coastal area from Cleggan in Galway to Donegal.

It also plans to resume sub-sea scans of the helicopter crash site on Thursday when the Granuaile returns from Galway.

A Naval Service patrol ship is being retained in Blacksod Bay to co-ordinate sea searches, and the search and rescue helicopter bases in Shannon and Sligo and the Air Corps will continue to provide air support, according to Irish Coast Guard operations manager Gerard O’Flynn.

He also paid tribute to the work of RNLI volunteers who have been at sea constantly for the past three-and-a-half weeks both north and south of the crash location - extending from Mayo’s Ballyglass and Achill to Sligo, Bundoran and Arranmore, Co Donegal.

“We need those boys home now. We really do,” Ms Smith said on Monday.

“My parents need them home, my sister-in-law needs him home. My nieces need him home. They have to come home now.

“To all fishing vessels big and small, from Achill island to Arranmore, we are appealing to them to please come to help us now,” she said.

“ We need them, we need their knowledge and we need them in the ongoing efforts to find Ciaran and Paul,”she said.

Ms Smith emphasised that safety was a prime consideration in searches, and this was reiterated on Tuesday by Supt Tony Healy of Belmullet Garda station.

“We are very conscious of offers of help, but we cannot have people in rigid inflatable boats who are not experienced and qualified,” Supt Healy emphasised.

Caitlín Uí Aodha, chairwoman of the Lost at Sea Tragedies (LAST), also emphasised safety, and noted that three weeks was still “very early” in the lifetime of a search at sea.

Ms Uí Aodha, from Helvick, Co Waterford, travelled to north Mayo earlier this week to offer support to the families and to the local community which has been providing hospitality in Halla Naomh Bhreandáin in the Gaeltacht village of Eachléím.

Her late husband, Michael, was one of the last two casualties to be found - in the fourth week of searching - when the Tit Bonhomme sank off Union Hall, Co Cork, in January 2012, killing five men.

“Fishermen really appreciate being asked to help, and this is about closure for the families and for the wider community which has been involved in this from the outset,” she said.