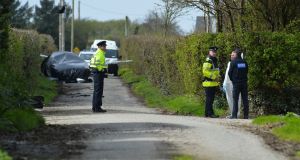 Gardaí at the scene of the collision in Rattoo, Ballyduff, Co Kerry involving a car and a farm teleporter vehicle. A man in his 60s has been arrested after suspicious puncture marks were found on the car. Photograph: Domnick Walsh/Eye Focus

A man in his 60s is due before Tralee District Court this morning after he was charged in connection with the suspected murder of a 74-year-old farmer.

The man, who is said to be a local farmer in his 60s, was arrested at a neighbour’s house in Rattoo near the collision between a teleporter and a car on Tuesday.

He was then brought to Listowel Garda station where he was detained under Section 4 of the Criminal Justice Act before later being charged.

He is due to appear before Tralee District Court at 10.30am on Wednesday.

Gardaí and emergency services were alerted at 8.45am to the collision between the vehicles on the road to the 11th-century Rattoo Round Tower off the R551, about 1.5km from the village of Ballyduff in north Kerry.

Anthony O’Mahony, a single man from Ardoughter, near Causeway, was pronounced dead at the scene.

Mr O’Mahony had bought the large parcel of land, comprising dozens of acres on which Rattoo tower – a perfect round tower structure – stands 27 metres high over the flat north Kerry countryside near the Shannon estuary, around 25 years ago.

He has been described locally as a progressive farmer involved for many years in growing vegetables on his Causeway farm and supplying the Dublin markets with his vegetables.

It is believed he was going to check on his spring barley at the Ballyduff farm on Tuesday morning.

Gardaí from Listowel who arrived on the scene became suspicious after finding several puncture wounds, commensurate with the teleporter farm machine, on the car in which the man died.

The scene was quickly sealed off.

Gardaí confirmed the men were “known to each other”.

The village postmistress, Nora O’Connor, and others spoke of how knowledgeable and progressive the late Mr O’Mahony was.

John Walsh of Yer Man’s Bar said the first most people knew of the collision was when the squad car went flying through the village.

The deceased was also well known and the land he had around Rattoo was “some of the best land in north Kerry”, Mr Walsh said.

The local parish priest said a “sense of awful shock and gloom” is hanging over the parishes of Causeway and Ballyduff.

However the spirit of solidarity that was in rural Ireland would help the community in the next few days, Fr Brendan Walsh said.

“There are two families this morning who are absolutely devastated,” Fr Walsh said.

He had been a skilful farmer, a quiet man.

“He was a man who was liked by the community and very, very well respected by all who knew him” the priest told Radio Kerry. “The good thing about a rural area like Ballyduff and Causeway is there is a great community spirit,”.”

Fr Walsh spoke of the strong faith that was in the two north Kerry parishes and how he had noticed locals dropping into say a prayer at the church in Ballyduff after news of the incident broke on Tuesday.

Gardaí are interviewing locals in the Rattoo and Ballyduff areas.