Publicans ‘devastated’ that pubs will not open on August 10th

‘It’s like a death. It’s a disaster,’ says Galway publican 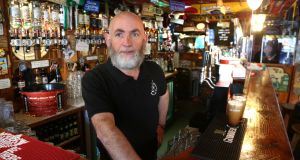 Michael Pearl, who has leased the Barr An Chaladh pub in Woodquay, Galway for the past 15 years, sat and listened to the radio on Tuesday when Taoiseach Micheál Martin came to the microphone in Dublin Castle.

Mr Martin’s decision not to open pubs on August 10th left him “devastated”, he said: “It’s like a death. I had publican friends ringing me who were devastated, we couldn’t believe it. It’s a disaster,” he said.

Unlike others, Mr Pearl is open because he now serves food, but he is not finding it easy. A friend of 15 years told him, “You’ll never see me in this pub again,” because Mr Pearl asked him to leave when the customer’s permitted 105 minutes were up.

Customers, Mr Pearl said, “get mad when asked to leave after two hours, but what am I supposed to do if there’s a queue outside and I have to turn tables? I’d love to let them stay.”

Now, the demand that food-serving premises close at 11pm will cause further grief with customers. “If you served until 10:30pm, you still won’t have everyone out by 11pm. I’ll be calling last orders at 10pm and that’s our best hour gone.”

His bar did not serve food before the Covid-19 crisis. And he is finding it “tough”. “We’re pushing food on people who have already eaten across the road,” he said.

Regulars come in looking for a pint and “cannot understand the food thing”, he said. “You can’t enjoy your pint any more without someone telling you to order food.”

A large percentage of the food served is ending up in the bin as “people have already eaten somewhere else”.

“Nine euros is too expensive, it doesn’t make any sense. Why don’t we just give it to charity?

“The worst thing is there’s no atmosphere any more, everybody came to the pub for live music and that’s gone,” he said. Before lockdown, the pub always had “100 people inside, young and old; now we can only have about 30”.

Today, many do not come out until 9pm, and then expect to be left alone until closing time, while trying to maintain social distancing in the pub is like “babysitting” customers.

“It’s hard to manage because people can’t go up to the bar, or even stand up. I’ve never been asked to sit down in a pub in my life,” Mr Pearl said.

With the extra staff needed to greet and seat, cook food and serve, Mr Pearl said he was “absolutely not” making a profit. “We’re just covering costs,” he said, while stock bought for St Patrick’s weekend has still to be returned.

Meanwhile, Darren Strogen, general manager of McGettigan’s restaurant and pub off Eyre Square, said the restaurant was cursed with “no show” customers, who booked tables and then did not bother turning up.

“People are booking multiple pubs, and the worst thing is that they don’t ring to cancel, it’s really a dagger through the heart. We’re lucky that we can take walk-ins, but I feel sorry for smaller places that don’t have the footfall.”