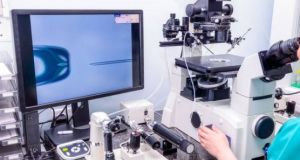 In Vitro Fertilisation (IVF) treatment in Ireland is currently available only to private patients, who are struggling with fertility. File photograph: iStockPhoto

The Government has set aside funding for in-vitro fertilisation (IVF) treatment for couples unable to conceive, the Taoiseach has confirmed.

Leo Varadkar said, however, that not all affected couples would receive funding as they will have to meet “certain criteria”.

IVF treatment in Ireland is currently available only to private patients who are struggling with fertility.

Mr Varadkar said new legislation to introduce regulatory measures in the sector is behind schedule, and getting it enacted by next year would be a “challenge”.

Around one in four couples in Ireland struggle with trying to have children, and it costs thousands of euro for private IVF treatment.

Mr Varadkar said those working on the IVF legislation are also working on abortion laws and guidelines, which led to the delay.

He said: “When it comes to legislative priorities in health in the new year, setting up the CervicalCheck tribunal and Brexit legislation will be prioritised in the first quarter, so I expect to get that [IVF] legislation into the Oireachtas next year, [but] getting it enacted next year will be a challenge.

“So we are examining mechanisms by which we could help couples who need IVF or AHR [Assisted Human Reproduction] to meet some of those costs. We have set aside some funding for next year to do that.

“It is the case that we already provide some assistance – through the tax system, you can write off 20 per cent of the cost against tax, and the medicines are covered under the DPS [Drugs Payment Scheme] scheme.

“But couples who need IVF or need AHR do face very high costs and we’d like to be able to assist them in some way.”

He said the Government has set aside money to assist couples but it will be means-tested, and the couples themselves will also have to make a contribution.

“You don’t necessarily need the legislation to be passed because the treatment is available in Ireland, it is not illegal, so it will be funded.” – Press Association