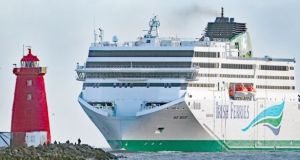 Ireland is in danger of becoming over reliant on Dublin Port while reducing the potential of the port closest to the EU, Labour party leader Brendan Howlin has said. File photograph: PA Wire

The Government needs to “immediately move” to bolster and diversify transport links to the European Union, the Labour Party has said.

Labour party leader Brendan Howlin said the Government is “standing idly by” while the UK is awarding contracts to charter additional ferry capacity. His comments came as it emerged that the UK will spend more than £100 million (€111m) chartering extra ferries to ease congestion at Dover, in the case of a no-deal Brexit.

“At the same time we have already seen a passive Irish Government response to the decision by Irish Ferries to withdraw from next summer, a direct ferry service to Europe from Rosslare to Cherbourg, France, and ensure a diversity of service,” the Wexford TD said.

“Ireland is now in danger of becoming over reliant on Dublin Port while reducing the potential of the port closest to the EU.”

“Instead it focuses on ensuring the landbridge is kept open, but as we can now see the UK has already charted extra ferries while the Irish Government is only engaging ‘with shipping companies to explore new connectivity and capacity options in response to Brexit’, as their own document published last week says,” Mr Howlin added.

“I am seriously concerned at the lack of strategic planning and foresight in Government about the need to take direct action to secure and enhance our connectivity to the EU.”

The UK’s Department for Transport (DfT) has signed contracts with French firm Brittany Ferries, Danish company DFDS and the UK’s Seaborne to ease pressure on Dover.

The additional crossings are understood to be the equivalent of around 10 per cent of the current traffic on the Dover Strait and will see ports in Poole, Portsmouth, Plymouth, Immingham and Felixstowe used.

Contracts were not put out to tender, with the DfT stating it was a “situation of extreme urgency” brought about by “unforeseeable events”.

“This significant extra capacity is a small but important element of the Department for Transport’s no-deal Brexit planning,” a spokesman for the DfT said.

“While remaining committed to working to ensure a deal is reached successfully, the department is helping ensure the rest of Government are fully prepared for a range of scenarios, including a particular focus on a potential no-deal and to mitigate the impact of any Brexit outcome on all transport modes.”