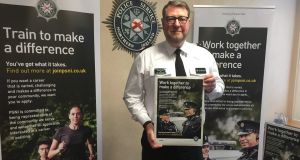 The North’s Deputy Chief Constable is to retire at the end of the month.

Stephen Martin said he informed the Policing Board on Monday that he would leave the Police Service of Northern Ireland (PSNI) when his successor was appointed.

The Chief Constable, Simon Byrne, thanked Mr Martin on social media for his “enormous and positive contribution to policing in Northern Ireland over the last 34 years.”

Mr Martin is a former District Commander of the PSNI in Derry and as Assistant Chief Constable led the force’s operations against paramilitary groups. He was appointed as temporary deputy chief constable in 2018, after the previous holder of the post Drew Harris was appointed as Garda Commissioner.

He was one of four senior police officers shortlisted for the position of Chief Constable last year.

Mr Martin said it had been a “huge honour and a true privilege” to be a police officer, and he believed “passionately” in “the contribution that policing makes to our community.

“It will be the many stories of bravery and compassion by my colleagues in the delivery of their duty which I will remember in the years to come,” he said.

Mr Martin said he was “extremely proud to have been part of the journey that policing has made to date; and I know, with the commitment of colleagues and the partnership of the community, we will continue to make Northern Ireland a safer and more confident society.

“I leave with a real sense of optimism for the future,” he said.

The justice minister, Naomi Long, said Mr Martin had a “long and distinguished career in policing” and had made an “enormous contribution to the security and safety of the Northern Ireland community.

“In his role as a senior officer, Stephen has been an eloquent advocate for the PSNI, working tirelessly and with integrity to play a crucial role in delivering a professional, high quality policing service for everyone in our society.

“We are all indebted to Stephen for the commitment he has shown over his 34-year career and I wish him well for the future,” she said.

The DUP MLA and member of the Policing Board, Mervyn Storey, said he wanted to pay tribute to Mr Martin “for his record of service to the people of Northern Ireland.”

During his almost 34 years of service, he said, Mr Martin “served the whole community through the dark days of the Troubles, the very real threat of terrorism and more recently alongside the establishment of devolved government in Northern Ireland and new, rising threats to law and order.

“We commend him on this contribution to local policing and wish both him and his family a very happy retirement.”

He also said the DUP looked forward “to engaging constructively and proactively with new appointments to the senior command team within the PSNI.”

Ulster Unionist MLA Doug Beattie said on social media that he was sorry to hear of Mr Martin’s retirement. “Your service has been exceptional and I believe you had so much more to give.”

Alliance councillor Sorcha Eastwood said he would be “missed” but he had “done so much work and leave a huge legacy.”

1 ‘Everyone still thinks it’s a joke’ - parents of toddler with coronavirus speak out
2 Ireland has strategy to ‘break the chains’ of coronavirus - WHO’s Mike Ryan
3 Miriam Lord: You cannot cocoon democracy – or can you?
4 Coronavirus: Almost 100 staff and residents in one nursing home test positive, Dáil hears
5 UK makes another coronavirus U-turn but doubts over strategy linger
Real news has value SUBSCRIBE