PSNI like a see-saw that is out of balance, says new chief constable 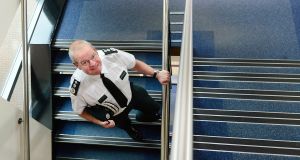 Chief Constable Simon Byrne at Policing Board headquarters, Belfast. ‘I have absolute awe for what people do... every day having to check underneath their car, having to check their route to work.’ Photograph: Arthur Allison/Pacemaker Press

In a conference room overlooking the Belfast waterfront, the 19 members of the North’s Policing Board sit in a semicircle. Opposite them is Northern Ireland’s new Chief Constable, Simon Byrne.

Once a month, he must come before the board. On Thursday they included, inevitably, Brexit, but also crime figures, the answering of non-emergency calls, and updates on high-profile investigations.

Soon in post, Byrne has already asked for approval to recruit 300 additional officers, on top of a further 300 he has already requested from the UK government because of Brexit.

More than 300 officers and staff will be in place by April – including 190 officers directing paid for by the UK’s EU Exit funding. This bring the PSNI’s number back up to approximately 6,900.

Byrne’s aim is to get back to the “magic figure” of 7,500, as envisaged by Lord Chris Patten in 1999. “We are policing a different security threat to anywhere else in Great Britain,” Byrne tells The Irish Times.

“I have absolute awe for what people do . . . every day having to check underneath their car, having to check their route to work,” he says. “That is unlike anywhere else I’ve ever worked.”

A significant number of the new recruits will go into neighbourhood policing teams, in daily contact with the public. “I’ve talked about seeing the PSNI like a see-saw which is out of balance,” says Byrne.

A lot of “energy” is spent on legacy, fighting terrorism, organised crime, and “less emphasis on answering the phone, dealing with local crime” and being seen in communities whether “it’s on foot, in a car or on a bike”.

“So I think my job is to try and use my experience from elsewhere to try and reset the equilibrium and the balance,” says Byrne, who is one of the UK’s most experienced police officers.

In 2018 a panel cleared him of misconduct after he was accused of bullying and humiliating staff in Cheshire. The panel found no evidence to support the allegations. Proceedings “could – and should – have been avoided”, it said.

Byrne faces challenges on every front. Dissident republican and loyalists remain a threat, public confidence in the PSNI is falling, while it is facing difficulties recruiting from among the Catholic population.

Equally, it has too many men, and two few women: 70 per cent off officers are male, and 30 per cent female. Less than 1 per cent are from an ethnic minority.

However, the debate should not just be about the 50/50 Protestant/Catholic split, since the PSNI should represent all demographics equally. “The debate needs to shift,” Byrne believes.

Fixing that requires more recruitment, though. “I don’t think you’re going to see a seismic shift overnight, even if we get the permission to grow the headcount,” he says.

“But I think it would be a crying shame if in a few years’ time, if we’re given permission to recruit more people, we don’t do all we can do grasp the opportunity to enable large numbers to try and reset the balance.

Regarding Brexit, the PSNI has planned for what it can, including increased paramilitary violence and civil disobedience – though Byrne has warned London that he will not police Border checkpoints, wherever they are.

Like much involving Brexit, the situation is fluid; if there were a specific threat, police “would have to respond appropriately if there’s a threat to life or there’s a crime taking place”.

Such interventions onto the public stage create problems for a policeman who must remain “ impartial and not get drawn into politics”. Is this difficult, he is asked.

Replying, Byrne says: “It is at the moment because in the absence of an Executive . . . I don’t really have any political top-cover to go to, to either express an opinion or seek support on a certain view.”

A no-deal Brexit could trigger dissident republican or loyalist paramilitary recruitment. This year, there have been eight attempted attacks on police by dissidents republicans.

Cross-Border smuggling is also a real threat. “History tells us you only have to drive through the Border area and see the fuel question, if nothing else, and we’ve got to be alive to that, because people will pursue profit.”

The type of smuggling that will take place will depend on the final Brexit deal. Organised crime, he has found, “is actually very efficient, they’re dynamic and they adapt to the environment really quickly”.

Byrne, too, has also had to adapt. His first lesson came a month ago, when he sparked controversy after he appeared to suggest that paramilitaries could have their children take into care.

He later clarified his remarks, saying he was “quite happy to withdraw the interpretation that children are pawns, if that’s what’s being heard. It wasn’t my intention. In a sense I felt a bit isolated and puzzled about it.”

Had he said it in Great Britain, it would have not caused the same reaction, he said. “ I came with one foot in the GB past, [and I] said something I didn’t realise would be taken [in that way] by some people.”

However, the controversy sparked conversations and offered an opportunity to build relationships: “I would like to think some good has come out of [it all],” he says.

Saying he brings “fresh eyes”, he did not come to Belfast with the intention of being “a reformer or a moderniser”, but, now, the next 12 to 18 months will see more of both “than perhaps I’d set out to do”.

Technology will be upgraded. So, too, will the PSNI’s buildings. “ I think people would be aghast about how poor the operating environment is for police officers.

“You’re fighting terrorism from 185 Portakabins – that’s part of our estate – most of which are over 40 years old and leak. We’ve got one over 200-year-old building in Enniskillen which is literally sinking into the sand.”

Until Byrne applied for the job, his last visit to Northern Ireland was 20 years ago. Three months in, he says “understanding the past is crucial to me being able to effectively discharge this job”.

The North has been on a journey to normality over the last 20 years, often a stuttering one. “It’s a crying shame if Brexit reignites old emotions and polarises communities. Frankly, we’ve just got to see.”