Ballistic missile test coincides with Beijing summit, and prompts angry response from US 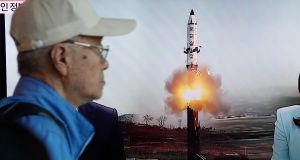 North Korea has tested a ballistic missile in defiance of calls to rein in its nuclear weapons programme, days after the inauguration of a new leader in South Korea and coinciding with a major international summit in Beijing hosted by its ally China.

Pyongyang’s test launch of a long-range missile has deeply upset nearly everyone with a stake in the current nuclear stand-off, including its ally Beijing, its arch-rival Seoul, an increasingly belligerent Washington, its long-time adversary Tokyo and its former friend Moscow.

The missile was fired from a site near Kusong, 100km north of Pyongyang, near its border with China. It flew 700 kilometres over half an hour before it fell into the sea between the eastern coast of North Korea and Japan.

Early assessments of the missile test indicate that Pyongyang is making progress in its efforts to develop an intercontinental ballistic missile (ICBM) capable of carrying a nuclear warhead as far as the United States.

US president Donald Trump has vowed not to let North Korea achieve this goal.

Sunday’s launch flew further and higher than the intermediate-range missile North Korea successfully tested in February from the same area, which South Korean missile experts believe to be an upgraded Pukguksong-2.

“If the missile reached a maximum altitude of 2,000km, chances are high that it is a long-range missile,” Chang Young-keun at Korea Aerospace University told Yonhap News Agency. Kim Dong-yup, a professor at Kyungnam University, said it was possible the missile could have a range of 7,000 kilometres, which would put the US Pacific Command (PACOM) in Hawaii within range.

“The flight altitudes of ICBMs are usually between 1,000 and 1,500 kilometres, but this missile reached a maximum altitude of 2,000 kilometres, meaning it could travel 6,000 to 7,000 kilometres,” the missile expert said.

Japanese defence minister Tomomi Inada also said the missile could be of a new type.

Without mentioning the missile launch, the Rodong Sinmun, the official newspaper of North Korea’s ruling Workers’ Party, said Pyongyang would keep beefing up its military for self-defence because “the imperialist US and its followers are notching up pressure on us”.

“Our military and people don’t blink an eyelash at any provocative actions by the enemies and will never give up on our powerful self-defence even for the whole world,” it said.

The launch is particularly provocative as it came on the day that North Korea’s main ally China welcomed 30 world leaders and envoys from 100 countries at its One Belt, One Road summit in Beijing to discuss a new Silk Road infrastructure plan to extend China’s influence.

South Korea’s delegation at the summit held a brief meeting with its North Korean counterpart and expressed concern over Pyongyang’s latest missile provocation.

The missile launch was the first since the inauguration as president of Moon Jae-in, a liberal who favours dialogue with North Korea. Mr Moon called the launch a “grave challenge” to the peace and security of the Korean Peninsula and the international community.

In a statement, China described the situation on the Korean Peninsula as “complex and sensitive”.

“All relevant parties should exercise restraint and do nothing to further worsen regional tensions,” the foreign ministry said in a statement.

The move has also prompted angry responses from Washington. The White House said: “With the missile impacting so close to Russian soil – in fact, closer to Russia than to Japan – the president cannot imagine that Russia is pleased.”

Mr Trump has stepped up pressure on the secretive state to abandon its nuclear plans, trying to leverage its trade influence to get more help from China. He is expected to meet his South Korean counterpart as early as next month to coordinate an approach toward North Korea and its leader Kim Jong-un.