‘We are not finished. We will probably have another march, and, yes, I would like to see asylum seekers join us’ 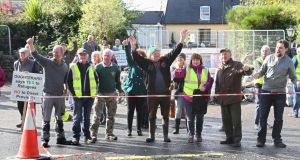 The first thing Barry Clifford did on Tuesday morning when he arrived at the former Connemara Gateway hotel outside Oughterard in Connemara was to shake hands with the security guards.

“We want to get on with our lives,” said Clifford, as he drank a cup of tea from the mobile truck that supplied protesters for nearly three weeks with home-baking and food provided by local restaurants.

Mr Clifford (63) believes he has a better insight into the lives of direct provision residents than Minister for Justice Charlie Flanagan, and, indeed, most of his neighbours who maintained the round-the-clock vigil at the hotel.

The retired builder spent 10 years of his childhood in industrial schools, “escaping” at 15. He moved to Oughterard in 2004, but he first saw it when he was 11 on a bus heading to Letterfrack’s notorious industrial school.

He was one of the few locals willing to give his name to reporters. His opposition to plans for a direct provision centre at the hotel were informed by his past and by his horror at the “warehousing” of children.

Like many in Oughterard, Mr Clifford bristles at being branded a racist.

In a brief statement, campaigners said: “This peaceful protest was never about not welcoming asylum seekers to Oughterard, but a protest against the inhumane conditions for asylum seekers.”

Following the news that the centre would not go ahead, protesters spent much of the morning tidying up around the hotel’s main gate, one blocked by rubble and rocks.

In high spirits, they dismantled all of evidence of their protest, while builders, who had been hired to refurbish the building, removed tools and equipment.

Rory Clancy’s pick-up was full of placards, a rain gear, and sun screen, small tokens of evidence of how organised the campaign in Oughterard has been.

Turf and logs were burned in barrels on the side of the road to keep protesters warm at night, while five gazebos offered shelter from the rain. A mobile toilet had also been brought.

Passing motorists honked their horns loudly. “It is a victory, obviously,” said Mr Clancy, a local publican. He learned that the plan had been abandoned as he was about to appear on Galway Bay FM.

Locals had been very naïve at the beginning, he told The Irish Times. “We were attacked straight away by both extremes, right and left, and they drowned us out.”

However, the campaign against direct provision was not over.

“We had been prepared to stay here until next May or whenever the election is. But we are not finished. We will probably have another march, and, yes, I would like to see asylum seekers join us. We have opened a suggestion box in the community centre looking for solutions on how to see asylum seekers accommodated.”

Questioned about Deputy Noel Grealish’s controversial “spongers” attack on African asylum seekers, Mr Clancy said: “He had one sentence picked up and it made our voices unheard.” He said he has not spoken with him since.

Most locals are jubilant that the plan for the centre is not going ahead, but are angry with elements of the media and online commentators who branded them, they say, as racist.

One man said his business clients were contacted and told he was a racist. A woman broke down as she explained that her 13-year-old daughter had been accused at school of coming from a racist town.

“We had people driving past making abusive gestures,” she said, insisting that Oughterard was, and remained, a welcoming place with many nationalities integrating well with locals.

A Dubliner living in the village for 25 years had favoured the centre at first, but changed his mind after research: “We put our name forward to take Syrian refugees into our home. We are not racist,” he said.

The protesters are convinced that the centre was abandoned because of their protest and nothing else.

One woman said she would go ahead with a planned visit to a direct provision centre elsewhere. “I got a call today to give me the all-clear to visit one, and I will. To me the system is headage for humans. The media should be investigating who is getting the contracts to run these places.”