Protest over sudden deportation of asylum seekers from Cork 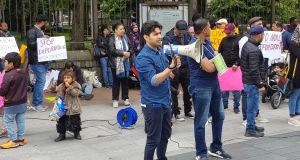 A protest was held in Cork on Monday over the deportation of two asylum seekers.

Asylum seekers in Cork have said they may go on hunger strike to highlight their concerns about sudden deportations of people from Ireland allegedly before they had a chance to consult their solicitors.

Mr Mahmud, who was one of the organizers of a protest in Cork attended by around 80 asylum seekers earlier this week, said two men, Pakistani nationals Junade Afzal and Sultan Bute, had been summoned to Dublin to sign on at the Garda National Immigration Bureau.

He claimed the two men were then detained by gardai for three days before being put on a flight to Pakistan. Officers from the GNIB later called to the Kinsale Road Accommodation Centre to collect their belongings to send on to them.

“It was so sudden. They were not allowed to talk to their lawyers so they could not get proper legal advice and their human rights were breached so we think this kind of deportation is illegal - these cases are not being handled properly,” said Mr Mahmud after the protest on Monday.

Mr Mahmud said many asylum seekers are being refused asylum not because of lack of evidence but because many of the staff from the International Protection Office (IPO) are not properly qualified to interview asylum seekers with many IPO officers not having English as their first language.

The IPO is a unit within the Irish Naturalisation and Immigration Service responsible for processing applications for international protection under the International Protection Act 2015.

“And if an asylum seeker is unable to tell a date off the top of their head, they call it inconsistency and use it to discredit the asylum seeker,” said Mr Mahmud.

“We may have to go on hunger strike if our demands are not met.”

Contacted about the arrests and deportations last week, the Garda Press Office said as part of “a joint return operation “ led by the German authorities and assisted by the GNIB, some 16 Pakistani nationals, including seven from Direct Provision centres in Ireland, were returned to Pakistan on June 13th.

The Department of Justice said the Irish system for assessing applications for international protection is characterised by “a high level of transparency and oversight” with the policies and procedures implemented having been overseen by United Nations High Commissioner of Refugees (UNHCR).

The department said while the IPO does not comment on individual cases, all applicants for international protection are carefully interviewed and their cases are individually assessed by experienced caseworkers who also examine supporting documentation submitted by applicants.

Refusals to grant asylum are accompanied by reports that set out the reasons why the application has been refused. If applicants are not satisfied with the decision issued by the IPO they may appeal to the International Protection Appeals Tribunal (IPAT).

Applicants also have access to free legal aid and to the Irish Courts where they may challenge the IPO decision by way of Judicial Review in the High Court, Supreme Court and ultimately the European Court of Justice, said the department.

Regarding whether people detained for detention sought legal advice, the department said it had no information to suggest that such detainees were not afforded the same rights and entitlements as any other person in detention, including the right to consult a solicitor.