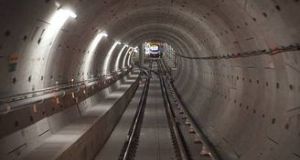 Stranraer and Larne are 31 miles apart but a preferred route for the tunnel, based on research by Victoria engineer James Barton, would be diverted to avoid Beaufort’s Dyke, a 1,000ft deep trench in the Irish Sea. Photograph: Getty Images

Stormont’s minister for infrastructure Nichola Mallon has poured scorn on fresh proposals for a rail tunnel linking the North and Scotland.

The SDLP deputy leader also warned that she could block the “Tory glamour project” after rail industry leaders in Britain said it would bind the UK closer together and address post-Brexit economic problems.

“Boris Johnson has had many new plans mooted for Northern Ireland, be it the Boris Bridge or Boris’ Burrow but it would be better for Boris to be focusing his efforts less on Tory glamour projects and more on fixing the multiple problems in front of him,” Ms Mallon told The Irish Times.

“I also want to be clear and remind the British government that devolved power rests here not in London and ministers here should decide on projects for Northern Ireland because we are locally elected and locally accountable.”

The stinging rebuke follows proposals by Britain’s High Speed Rail Group (HSRG) - which represents industry and operators - to an ongoing review of UK transport that a tunnel be dug under the Irish Sea between Stranraer and Larne.

Sir Peter Hendy, who is heading the review on how to improve transport connectivity between Scotland, Wales, Northern Ireland and England, is expected to publish his interim report within weeks.

British prime minister Mr Johnson had originally proposed a bridge between the North and Scotland three years ago, an idea that was widely derided by engineers.

Stranraer and Larne are 31 miles apart but a preferred route for the tunnel, based on 120-year-old research, would be diverted to avoid Beaufort’s Dyke, a 1,000ft deep trench in the Irish Sea, according to the HSRG submission.

Jim Steer, an HSRG board member, said: “There is an urgent need for both new and improved transport links between the four nations of the United Kingdom, which have been systematically neglected for too long.

“Cross-border travel markets for rail were growing strongly over the period to 2019. Travel generates economic value, but the opportunity for further economic stimulus from this source will be lost if transport network capacity constraints are not addressed.”

The pitch submitted to the review claims the proposal has the backing of the Northern Ireland Assembly and the Scottish parliament and that there is a “feasible path to its funding from the UK Exchequer that does not adversely impact on other transport funding”.

However, Ms Mallon said “if the British Government want to send money Northern Ireland’s way that’s welcome, but the SDLP won’t be accepting any imposition on devolved power and we certainly won’t be squandering public money on Tory manifesto obsessions.”

“With Brexit and Covid the challenges facing communities right across these islands are real,” she said.

“Investment is needed to protect businesses, workers, improve our roads, rail and connectivity and to build a better future as we look to recovery.

“It’s time the prime minister woke up to that reality, people here simply don’t want a Boris bridge, a Boris burrow - frankly a Boris anything. They want jobs, opportunities, stability and a brighter future.”

A British government spokesperson said: “We have asked Sir Peter Hendy to make recommendations on how to improve transport connectivity between Scotland, Wales, Northern Ireland and England. His recommendations will be published in due course.”

Experts have previously raised concerns about the practicality of constructing a bridge between Northern Ireland and Scotland and said it would require dozens of support towers at heights “never achieved anywhere in the world”. – Additional reporting Guardian