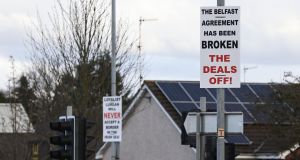 A loyalist sign in Lurgan, Co Armagh, about the Belfast Agreement amid tensions over the Northern Ireland protocol. Photograph: Liam McBurney/PA Wire

A community organisation which represents former loyalist paramilitaries has called for “calm and rational” engagement to lower tensions and solve issues related to the Northern Ireland protocol.

East Belfast-based Reach UK also gave its support to a plan announced by the DUP last week to “free” Northern Ireland from the protocol.

In a statement the organisation said it “endorses the five-point plan from our country’s First Minister, and call on all to engage with it as a first step to resolving the divisive Irish Sea border and Northern Ireland protocol”.

All parties in Northern Ireland should “calmly and rationally engage with the UK government to address the protocol and Irish Sea border issues, which are causing such alarm within all our communities”, it said.

It is understood these sentiments are backed by the loyalist paramilitary groups the UDA, UVF and Red Hand Commando, and by loyalist community groups.

Loyalists and unionists are opposed to the protocol – the part of the Brexit Withdrawal Agreement which relates to Northern Ireland – because it places a customs and regulatory border in the Irish Sea between it and the rest of the UK.

Inside Politics · The centenary of Northern Ireland - with Prof Brendan O'Leary

An online petition by the DUP calling for triggering of article 16 in order to secure “unfettered” trade between Britain and Northern Ireland reached the required 100,000 signatures within 24 hours, with the party receiving notification on Friday that it will be debated at Westminster later this month.

The petition was part of its five-point plan which also includes the boycott by the DUP of all cross-Border activity related to the protocol and the opposition of all protocol-related measures in the North’s Assembly.

The DUP leader, Northern Ireland’s First Minister Arlene Foster, said on Friday that people needed to “take heed” of what was being said by the unionist community. “There has to be recognition in London, Dublin and Brussels that damage has been done by this protocol and therefore we have to deal with it.”

However, a joint statement released by the EU and UK following talks on Thursday night gave no indication either side was prepared to abandon the protocol, with Cabinet Office minister Michael Gove and the EU vice-president Maros Sefcovic reiterating their “full commitment” to it, and saying they had agreed to find “workable solutions on the ground”.

In recent weeks graffiti opposing the protocol has appeared in loyalist areas, and staff carrying out physical checks on goods at Larne and Belfast ports were withdrawn from work for a time over concerns for their safety.

Questions have since been raised about the decision-making process which led to their withdrawal. The Police Service of Northern Ireland (PSNI) has consistently said there was no credible threat and those responsible were “individuals or small groups”, an assessment backed up by loyalist sources.

Those sources have described growing tensions in their areas, and while it is understood former paramilitary groups have no desire for a return to violence there are concerns that if tensions continue to rise this could become harder to maintain.

Instead of the protocol Reach UK said it supported a mutual enforcement proposal from the pro-Brexit think-tank the Centre for Brexit Policy, also backed by former Ulster Unionist party leader Lord David Trimble, which it claims will avoid customs checks by having the UK and EU agree to recognise each other’s standards in law.

In its statement it called on everyone in Northern Ireland to sign the DUP’s petition “extending the 100,000 signatures to 250,000, not as a party-political exercise but as a measure of province-wide opposition to the Northern Ireland protocol and Irish Sea border”, and called on the British government to fulfil its commitment to “delivering unfettered access” within the UK internal market.

It also warned the Belfast Agreement had been promoted during Brexit “as a totally green document”. If the agreement could not be implemented “inclusively, pro-union citizens will have no choice but to withdraw all support” from it.