Prince Charles to visit Cork and Kerry next month 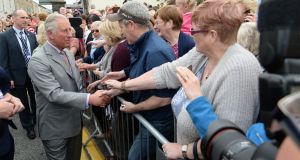 Prince Charles and his wife Camilla Duchess of Cornwall, meeting locals on James’s Street, Kilkenny on their visit in May 2017. Photograph: Dara Mac Dónaill

Britain’s Prince Harry may be making the headlines this week with his marriage to American actress Meghan Markle but it’s his father, Prince Charles who looks set to make headlines in Cork and Kerry next month when he visits with his wife Camilla, Duchess of Cornwall.

The Prince of Wales is set to follow in the footsteps of Queen Elizabeth II who got a royal welcome in the Rebel capital in 2011 when he jets into Cork Airport on June 14th for a three day visit which will see him spend some time in Cork city before visiting North Cork and Kerry.

Senior gardaí from the Crime and Security Branch in Dublin have already travelled to Cork for meetings with senior officers from Cork City, Cork North and Kerry Divisions to put in place security measures for Prince Charles and Camilla who are expected to stay overnight in North Cork and Kerry.

The couple previously flew into Cork Airport in 2004 when they travelled to Lismore in Co Waterford to stay for a weekend with Prince Charles’ close friend the Duke of Devonshire at Lismore Castle.

The Prince of Wales and his wife last came to the Republic in May 2017 when they visited Dublin, Kildare and Kilkenny. Over €2.1 million was spent by gardaí on security for the trip.

The couple also came in May 2015 when they travelled to Mullaghmore, Co Sligo, where the prince’s great-uncle, Lord Louis Mountbatten, and three others were killed in an IRA bombing in 1979.

The exact details of their latest visit have yet to be finalised but it is expected that Prince Charles will visit Killarney when in Kerry, thus following in the footsteps of his great-great-great- grandmother, Queen Victoria who visited Heaven’s Reflex in 1861.

Queen Victoria, accompanied by her husband, Prince Albert and their three children, Alfred, Alice and Helena, were greeted by huge crowds during their three day visit in August 1861 when they stayed in Killarney House and in Muckross House.

According to the Kerry Evening Post of the time, Queen Victoria, whose escort consisted of 40 members of the 1st Dragoons from the Curragh, enjoyed a trip on the lakes during the three day visit to the Kingdom which was policed by 400 members of the Royal Irish Constabulary.

Security was also tight in 2011 when Queen Elizabeth and Prince Philip visited Cork on the final day of their four day visit to Ireland when she laid a wreath at the Garden of Remembrance in Dublin and later visited the Irish National Stud in Co Kildare and The Rock of Cashel in Co Tipperary.

However, it was her visit to Cork city where she was given a guided tour of The English Market by then Lord Mayor of Cork Cllr Mick O’Connell and a photograph of her laughing heartily at a joke cracked by fishmonger, Pat O’Connell made headlines around the world.

Speaking to The Irish Times, Mr O’Connell said that if Prince Charles did want to retrace his mother’s footsteps next month, he would get a warm welcome from the people of Cork and the traders in the English Market.

“If he was to come to Cork, of course it would be a pleasure to extend him the same warm Cork welcome we extended to Queen Elizabeth – the reaction to her visit and particularly to Valerie O’Sullivan’s photograph of her at our stall has been incredible,” he said.

“It was seven years ago but it’s a never ending stream of British visitors coming into us in their droves on foot of Valerie’s photo of the queen at our stall; I presume that photo will go on my gravestone because they won’t need to say anything else about me.”

1 Tyrone midwife on the cover of Vogue magazine
2 Covid-19: Limited easing of restrictions proposed as pressure grows to reopen Irish economy
3 All pupils will not be able to return to class at same time, INTO warns
4 George Floyd death: Trump accused of ‘trying to divide’ by ex-defence chief Mattis
5 Ireland has higher per capita death ratio than US, study finds
Real news has value SUBSCRIBE