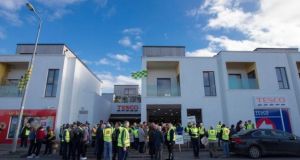 A protest outside a proposed centre for asylum seekers in Ballinamore Co Leitrim will continue, despite a plea from a senior Catholic cleric in the diocese that it be suspended.

Msgr Liam Kelly, administrator of the diocese of Kilmore, called for a suspension of the round-the-clock protest, partly so that the community could distance itself from the attack on Sinn Féin TD Martin Kenny.

Praising Mr Kenny, whose car was torched at his home early on Monday, for courageously speaking out about racism, Msgr Kelly criticised Ireland’s direct provision system for asylum seekers as “not fit for purpose”.

Communities such as Ballinamore felt they had been “demonised”, but they had been “blind-sided by the Government’s failure to consult with them in advance and listen to their views”.

Calling for a suspension of the protests, Msgr Kelly said: “I am concerned about the image it might give of the community if you have pictures of cars being burned out and then photographs of protests.”

He said it might give the impression that local people were prejudiced or against asylum seekers: “But I know that community well – they are great people and welcoming people.”

The priest, appointed in January as diocesan administrator, said the fact that so many people are prepared to be out of doors at this time of year “shows the depth of feeling and concern”.

However, the organisers of the Ballinamore protests said their action is being conducted “in a peaceful, dignified and respectful manner” and would continue because it is “the only voice they had”.

Repeating his condemnation of those who attacked the Sinn Féin TD’s home, spokesman, Gordon Hughes said: “[Ballinamore] has been, and will remain steadfast in its opposition to any type of criminality or hatred.”

Meanwhile, more than a dozen female asylum seekers will arrive on Friday at an Achill Island hotel which has been leased by the Department of Justice as a direct provision centre, despite a local protest campaign.

Originally, the State had planned to house 38 men at the Achill Head Hotel at Pollagh, but changed their plans in the face of local opposition, though it is expected that all of the 38 places will be filled, including men.

The first group of asylum seekers had been due to arrive last Thursday, but that was put back to Wednesday, but it was delayed again until Friday. A heated public meeting last week has been followed by a number of protests at the hotel

Local Fianna Fáil councillor Paul McNamara said “people of all nationalities live and work” on Achill and are welcome to do so. “[We] as a community are in no way racist and pride ourselves in welcoming everyone to our island.”

However, the asylum seekers will be welcomed when they arrive by other locals, including Green Party general election candidate Saoirse McHugh, though she does not foresee the issue causing conflict between neighbours.

More than 60 locals have pledged to help the new arrivals, though the “Achill Says No To Inhumane Treatment of Asylum Seekers” group has more than 820 members on its Facebook page, though not all of them are necessarily locals.

“Our [the two group’s] motivations are not separate, everyone who attended the meeting and is protesting in Achill has said they are against direct provision and what a bad system it is, I totally agree with that,” said Ms McHugh.

“I think you can hold both positions, that direct provision is an awful system, and still be welcoming when people are getting off a bus. I don’t think there will be any conflict at all. We are not really on opposing side,” she said.