President Trump to allow former INLA prisoner stay in the US 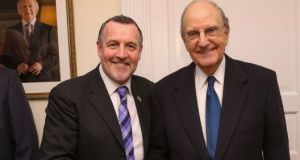 The Trump White House is to allow a former Irish National Liberation Army (INLA) prisoner stay in the United States.

Acting Homeland Secretary Kevin McAleenan, an Irish-American, has intervened to prevent Malachy McAllister (59) being sent back to Northern Ireland on Wednesday.

Mr McAllister has fought for decades to avoid being deported from the United States. He was jailed for seven years for two INLA attacks on Royal Ulster Constabulary officers during the 1981 hunger strikes.

He was released in 1985 and took no further part in paramilitary activity. He fled his home in Belfast in 1988 after a loyalist gun attack on his home and now runs a construction business in New Jersey and an Irish pub in Manhattan.

He sought asylum in the United States in 1996, but his application has been consistently refused by the US Immigration and Naturalisation Service which still classifies his acts as being of a “terrorist” nature though the US has been a strong supporter of the Good Friday Agreement and the peace process.

In a statement the Department of Homeland Defence said a stay has been put on the deportation for a further six months.

The decision had been made at the discretion of Mr McAleenan “in accordance with standing policy”.

This is to allow the chairman of the Senate Judiciary Committee, Lindsey Graham, and other members of the Congress pursue a private bill which would allow Mr McAllister to stay in the United States.

Department spokesman Tyler Houlton said: “As provided for under existing DHS policy, this stay has been granted as a courtesy to ensure Congress has the time and information it needs to consider the pending private immigration bill.”

The Ancient Order of Hibernians (AOH) thanked President Donald Trump for the stay of deportation which it added would not have happened without the support of many prominent politicians in the United States including Senator Chuck Schumer and Senator Graham.

The Order said Mr McAllister has “done nothing but positively contribute to the American community” by creating two large businesses.

“Despite being a prima facie example of the greatness of the American dream as a land of second opportunities, the McAllister family continues to live their lives in one year, and recently six month, intervals,” the order added.

“Nothing can diminish the Hibernians profound gratitude for this six month stay. However, it is also a call to action to permanently fix the problem and let Malachy McAllister and his family enjoy the peace and security that America has symbolised for generations of immigrants.”