Higgins commemorates Irish and Malawians who fought in the conflict 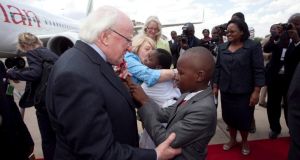 President Michael D Higgins has said memories of the first World War should forever be a warning against extreme nationalism.

Speaking last night at a dinner in Malawi’s capital Lilongwe, hosted by the country’s president Arthur Peter Mutharika, he recalled “over 200,000 Irishmen fought in that war, while here in Malawi thousands signed up to fight with the King’s African Rifles, and were engaged in battles against German-led troops, mainly in what is today Tanzania”.

“No other dependency in Africa suffered the loss of such a high proportion of its young manhood as Malawi did...May the remembrance of those events guard us forever against the dark passions of extreme nationalism.”

President Higgins arrived in Lilongwe from Addis Ababa yesterday afternoon to begin the first official visit by an Irish head of state to Malawi. He will be here until Thursday, during which time he will tour centres assisted by Irish Aid and projects involving Irish NGOs and missionaries.

Irish funding to Malawi increased from just under €7 million in 2007, when the first Irish Embassy opened, to €20 million last year.

One of the poorest places on earth, Malawi is placed 174th of 187 countries on the UN Human Development Index. Of its 16.8 million people, 40 per cent live on less than a dollar a day and 62 per cent are continuously at risk of hunger, with 41 per cent at severe risk. A predominantly rural country, 85 per cent of its population is involved in subsistence farming.

This year Malawi celebrates 50 years of independence from Britain. In his speech President Higgins congratulated its people on this important anniversary.

“One of the most damaging aspects of colonialism, I believe, is the way it shatters our view of the past. How to imagine a future released from the burdens of distorted past memories and seemingly insurmountable, present difficulties?”

He suggested the key lay in the word “imagine”. It was “the important term here”, he said. “Indeed, while brutal and inhuman deeds cannot, for the most moral of reasons, be forgotten, it is only through an act of imagination and creativity that we can prevent the tragic past from colonising the future.”