President Higgins warns against any attempt to ‘erase the past’ 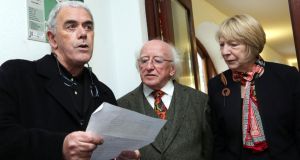 President Michael D Higgins and his wife Sabina listen as Theo Dorgan recites his poem, Waystation, which is part of the Letterfrack Poetry Trail which the President opened. Photograph: Joe O’Shaughnessy

President Michael D Higgins has warned against any attempt to “erase the past” when taking positive initiatives.

Speaking in Letterfrack, Connemara, Mr Higgins said it was important that we “recognise” the past but “not be defeated by it”.

He was referring to the record of the former St Joseph’s Industrial School, now the furniture-design campus of Galway-Mayo Institute of Technology (GMIT), which he visited yesterday , before unveiling a poetry trail in the village and opening Conamara Sea Week.

“I think that it is very important when you are doing the new positive, creative things not to make the slightest attempt to erase that past,”Mr Higgins said.

At least 147 children died of abuse and neglect in the industrial school run by the Christian Brothers from 1887 to 1974.

As a member of the McBride commission on prisons in the late 1970s, he heard some of the testimonies, he said, though many more “weren’t willing to break their silence”.

The legacy of that abuse is a theme on the poetry trail, which Mr Higgins unveiled as part of the 30th anniversary of Conamara Environmental Education and Cultural Centre.

He noted how young people combined old and new skills to produce a “combination of the aesthetic, the artistic, the craft and the imaginative”, and recalled how his presidential inauguration chair had been designed by the GMIT graduate John Lee.

GMIT Letterfrack department head Dermot O’Donovan thanked Mr Higgins and his wife, Sabina, for sending storm-felled trees from Áras an Uachtaráin to the college. Some of these were more than a century old and had lived through “nine presidents, 13 taoisigh” , two world wars, economic crashes and “25 episodes of Father Ted”.

Mr Higgins also expressed concern about maintaining services for people living in rural areas, and stressed that these services “need to be looked after”.

“You need to realise that rural life is neither a source nor just a residual to urban life,” he said. A confident community, which recognises the importance of this, relies on “good planning”, he added, and “I so wish the local authorities success in that”.