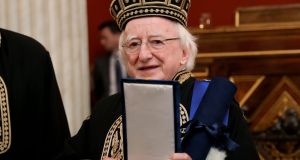 President Michael D Higgins at the University of Athens where he received an honorary degree. Photograph: Maxwell

President Michael D Higgins was conferred with an honorary degree by the University of Athens, on Friday.

In an in-depth speech at the conferring ceremony in the Greek capital he drew on literature, culture and history, on the ancient and enduring relationship between Ireland and Greece and their shared future.

The second day of his state visit to Greece was very much an occasion for the President to expound on his philosophy in a city that gave birth to so many of the ideals that guide his own thinking.

“Why, we might ask, has the work of philosophers been the most neglected source of insight on the recent institutional history of the European Union? In its modern origins, economics was so much more closely informed by philosophy and ethics. It had a formidable breadth,” he said.

“We have had a poor, a lesser, economics that at best is descriptive of a set of measures that sought to satisfy an ideological position rather than assist in creating policy options that could be social in their reach.”

He also called for culture and youth to be central in shaping and assuring, respectively, the future of the European Union. That included reappraising the way languages are taught and valued.

“How positive it would be if every European citizen left school with at least one second language at a high degree of proficiency. Surely this is an empowering key to a union of empathy, where citizens genuinely understand each other, appreciate what we have in common, open themselves to enrichment, and have the ability as well as the will, to sustain a conversation about our future.”

He said that “neo-utilitarianism” was capable of dislodging universities from their primary purpose.

“It should be a source of deep concern that knowledge of the humanities, so long the bedrock of our education system, is now so neglected in the name of creating space for other disciplines.”

In drawing comparisons between Greece’s and Ireland’s history of emigration, the President said that “our sense of self must draw on the experience of our diaspora”.

He added that both countries’ response to the migration issue “is, and will be, best informed when it draws on our respective historical experiences,” noting that Athens University was “founded just years before a devastating famine killed upwards of a million Irish and forced another million to flee their homes for safer shores”.

Greece, he said, “has suffered multiple upheavals and refugee flows including the devastation of the Greek community in Asia Minor in the 1920s”.

Earlier, the President addressed a breakfast meeting of Irish and Greek business leaders.

He also attended a concert in celebration of Irish and Greek culture at the Megaron concert hall that featured musician Colm Mac Con Iomaire, poets Paula Meehan and Theo Dorgan and a Greek ensemble, Apodimi, among others.

On Saturday he is expected to visit a refugee camp in Athens, as well a Greek company that is co-operating with an Irish company to produce animal feed from the byproducts of olive pressing, before returning to Dublin.