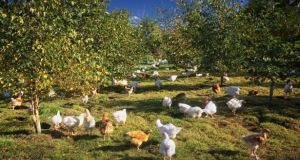 Poultry producers are reaching a “tipping point” because of changes to RHI payments, the Ulster Farmers’ Union (UFU) said.

Legislation to limit payments under the green energy scheme placed Northern Ireland’s producers at an immediate competitive disadvantage with the rest of the UK, the union added.

UFU deputy president David Brown said: “To remain profitable, independent growers are already reporting to us that they are at a tipping point for their reversion to fossil fuels.

“The 2019 legislation has created a significant ‘cashflow shock’ for many of the independent growers.

“If the tipping point and competitive and comparative disadvantage are to mitigated, corrective action must be taken immediately.”

An equivalent scheme in Britain is paying up to £20,000 per boiler.

Mr Brown told the Northern Ireland Affairs Committee of MPs at Westminster additional heat was essential to the life-support of day-old chicks through to maintenance of mature birds.

He said it was a significant element in the production cost.

He said: “Each shed may contain tens of thousands of day-old chicks which would otherwise die if the primary heating system failed when they are unable to sustain their own body heat.

“The 2019 legislation has placed Northern Ireland producers at an immediate competitive disadvantage to all other producers within the UK marketplace.

“When compared with the Irish renewable heat scheme, the 2019 legislation will place Northern Ireland-based production at a significant comparative disadvantage.”

The union said it was committed to supporting its members and to the decarbonisation of the poultry supply chain.

It added: “However, this commitment must be balanced by the economic reality of the cost and complexity of generating heat from renewable fuel when compared with the simplicity and economy of liquid petroleum gas and other fossil fuels.”

A Department for the Economy spokesperson said the tariffs available under the Northern Ireland scheme were based on actual data and evidence gathered from participants.

He said: “Evidence shows that the upfront capital costs and ongoing fuel costs are lower in Northern Ireland when compared to Great Britain so not only have Northern Ireland participants paid less up front, they also pay less for their heat produced from biomass.

“For these reasons, the tariffs for the Northern Ireland RHI scheme would not be expected to parallel those on the Great Britain scheme.”

Both are based on a target rate of return of 12 per cent.

That in the Republic will offer payments over 15 years rather than the 20 years in Northern Ireland and Great Britain.

State aid approval from Europe for the Irish scheme was provided on the basis of an 8 per cent rate of return.

The Department will be offering a voluntary buy out to allow each participant to achieve a lifetime 12 per cent rate of return.

The Department will also be issuing a “call for evidence” to seek views from RHI participants and other stakeholders ahead of establishing a ‘hardship unit’, under an independent chair. – PA