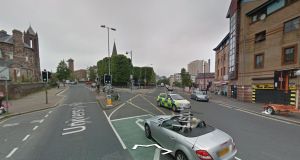 Bradbury Place, south Belfast: The PSNI confirmed it is investigating the sudden death of a man aged 26 there on November 15th. File photograph: Google Street View

Responding to reports that they resulted from drugs overdoses, the Police Service of Northern Ireland (PSNI) said it was too early to make any connection between them.

In a statement, Det Insp Pete Mullan, from the PSNI’s Organised Crime Branch, said he was aware of “concern in the community” regarding the spate of sudden deaths between Friday , November 15th and Sunday, November 17th.

“I am also aware of reports surrounding the circumstances in which they occurred and their causes,” he said.

“What I can say at this time is that postmortem examinations have been held into each of these sudden deaths and we are now waiting on the results of further tests.”

According to the Irish News, the North’s Public Health Agency issued an “early warning system” alert last week to health authorities, the PSNI and the Department of Justice about “five suspected drug overdose deaths”.

The PSNI confirmed it is investigating the sudden deaths of a 26-year-old man in Bradbury Place, south Belfast, and of a 29-year-old man in Clandeboye Gardens, east Belfast, on November 15th.

It is also investigating the sudden deaths of a 21-year-old man in the city’s Cornmarket and a 48-year-old man at Waring Street, both on the Saturday, as well as that of a 19-year-old woman at a premises near Victoria Square on the Sunday.

“I want to take this opportunity to reassure the community that we, as a police service, are committed to tackling the illegal supply of drugs,” said Mr Mullan.

“The devastation experienced as a result of drug misuse is cross cutting and impacts people’s lives at every level in Northern Ireland.

“We know that due to the causes, complexity and pervasiveness of drug misuse, no one agency can tackle it alone; however, we will continue to work in tandem with partner agencies to tackle drug abuse and to do what we can to keep people safe.

“We will do this by continuing to work with our law enforcement partners to prevent the importation and supply of illicit and counterfeit drugs by proactively investigating the organised crime groups who supply them.”

Two men were charged with a number of drug-related offences in relation to the seizure of suspected heroin with an estimated street value of £20,000 (€23,290) after a pre-planned search at a property in Belfast’s Fitzroy Avenue on Friday, November 15th.