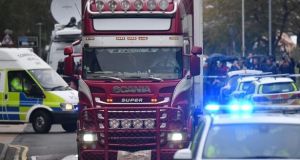 Police officers drive away a lorry in which 39 dead bodies were discovered in Grays, Essex. File photograph: Ben Stansall/AFP via Getty

British Police have arrested a Northern Irish man over the discovery of 39 dead migrants in the back of a truck in Essex last month.

In a statement this morning, Essex Police said their counterparts in Thames Valley police had arrested the 23-year-old man on their behalf in the early hours of the morning.

The arrest was made on the M40 in Beaconsfield, Buckinghamshire, in connection with the ongoing enquiry into the deaths of 39 Vietnamese nationals in the lorry found in the suburb of Grays on October 23rd last.

He was arrested on suspicion of conspiracy to traffic people and conspiracy to assist unlawful immigration and remains in custody.

Police are seeking, or have arrested, several people from both Northern Ireland and the Republic in relation to the inquiry into the deaths.

A Northern Irish man alleged to have delivered the trailer in which the migrants were found is being held on unrelated charges in Dublin. He is also the subject of a European arrest warrant in relation to the investigation, and associated proceedings.

The driver of the trailer when it was discovered, Maurice Robinson, has been charged with 39 counts of manslaughter. Three other Irish people were arrested and later released without charge in the UK.

The Hughes brothers, Ronan and Christopher, hauliers who leased the trailer from another Irish company, are wanted for questioning in the UK but have not surrendered themselves to the authorities.