New Zealand prime minister Jacinda Ardern has urged people not to give the suspect of the Christchurch mosque shootings notoriety by mentioning his name. Video: New Zealand Parliament TV 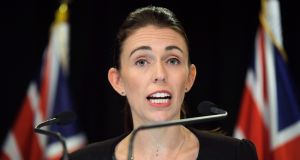 New Zealand PM Jacinda Ardern says she will never speak the name of the terrorist accused of killing 50 people in attacks on two Christchurch mosques on Friday. Photograph: David Lintott/AFP

New Zealand’s prime minister Jacinda Ardern has vowed never to speak the name of the alleged Christchurch gunman and said the person responsible would face the “full force of the law”.

In an impassioned speech to the country’s parliament, Ms Ardern implored others “to speak the names of those who are lost, rather than the name of the man who took them”.

“He sought many things from his act of terror but one was notoriety,” she said. “That is why you will never hear me mention his name.”

Outlining some of the stories of bravery in the wake of the shootings, the prime minister praised the two police officers who apprehended the suspect, ramming his car while shots were still being fired.

She added: “Naeem Rashid died after rushing at the terrorist and trying to wrestle the gun from him.

“Abdul Aziz, originally from Afghanistan, confronted the armed terrorist after grabbing the nearest thing he could find, a simple Eftpos [card] machine.

“There will be countless stories of bravery, some of which we may never know. But to each of you, we thank you.”

Promising that the perpetrator would face the “full force of the law in New Zealand”, she added: “The family of the fallen will have justice.”

Fifty people died in the shootings at two mosques in Christchurch after a lone attacker opened fire during Friday prayers.

Thirty people remain in hospital after being injured in the attacks, nine of them in a critical condition.

Police said they have completed postmortems on all 50 victims and have formally identified 12 of them. Six of the identified victims have been returned to their families.

Islamic tradition calls for bodies to be cleansed and buried as soon as possible.

As the nation continues to come to terms with the scale of the tragedy, Ms Ardern vowed action would be taken to ensure such an atrocity could never happen again.

“Our hearts are heavy but our spirit is strong,” she said.

On Monday, New Zealand’s cabinet made “in principle” decisions about gun law reform, with further details to be announced by next Monday.

An inquiry into the events leading up to the attacks will also take place.

“There is anger that this happened here,” she said. “There are many questions that need to be answered. The assurance that I give you is that they will be.”

New Zealand police commissioner Mike Bush previously said police were confident one person was responsible for the shootings.“That doesn’t mean there weren’t possibly people in support and that is to form an important part of our investigation,” he added.

Brenton Tarrant, a 28-year-old Australian, has been charged with one count of murder and he appeared in court on Saturday. He was remanded until April 5th.

Tarrant appeared to have live-streamed the terror attack and outlined his anti-immigrant motives in a manifesto posted online.

In the live-stream, a man inside a mosque appears to say: “Welcome brother,” as a gunman approaches.

Facebook said it had removed 1.5 million videos of the attack worldwide in the 24 hours after the shootings, 1.2 million of which were blocked at upload.

On Tuesday, it said no one had reported the video while it was being streamed live, with the first report coming 29 minutes after the broadcast began and 12 minutes after it had ended.

Chris Sonderby, vice-president and deputy general counsel at Facebook, said the video was viewed fewer than 200 times during the live broadcast.

“The video was viewed about 4,000 times in total before being removed from Facebook,” he added.

“Before we were alerted to the video, a user on 8chan posted a link to a copy of the video on a file-sharing site.”

He said the company was “working around the clock” to stop the video being posted on its site.

Of those killed in the massacre, 42 died at the Masjid Al Noor mosque on Deans Avenue in central Christchurch, seven were killed at the suburban Linwood Masjid Mosque, and one person died at Christchurch Hospital.

A number of improvised explosive devices found on a vehicle after the shootings were defused by police. – PA