PSNI ‘sick of being punchbag for failures of society’, says Police Federation chairman 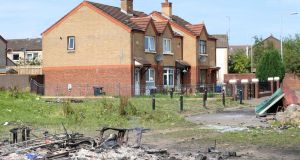 The scene in Distillery street, Belfast, where 29 police officers were injured after being attacked as they were involved in removing bonfire materia. Photograph: Stephen Davison

Police are “sick of being a punch bag for the failures of society”, the head of the North’s Police Federation has complained after at least 26 PSNI officers were injured on Saturday while assisting contractors remove an internment anniversary bonfire in west Belfast.

The officers were attacked with petrol bombs, stones, bottles and other missiles as they oversaw the dismantling of an anti-internment bonfire on Distillery Street.

The bonfire was erected to mark the 49th anniversary of the introduction of internment on August 9th, 1971, when hundreds of people were arrested and detained without trial.

“During the operation, officers came under sustained attack from large groups of youths throwing petrol bombs, masonry and other missiles towards police,” said Supt Melanie Jones.

“At least 26 officers have sustained injuries and are currently receiving treatment,” she said.

“Footage from evidence gathering cameras will be reviewed and all efforts will be made to identify those involved,” said Supt Jones.

“Parents and guardians have an important obligation to keep young people safe by knowing where they are going and who they are with. Young people must understand the dangers of getting involved in behaviour which could result in them injuring themselves or others, or ultimately, ending up with a criminal record,” she added.

Mr Lindsay said police officers were drawn “into the middle of a row over what should or shouldn’t take place . . . They are sick of being a punch bag for a society that has failed to tackle contentious issues.”

Mr Lindsay added: “The attacks were premeditated . . . Those behind this reckless and irresponsible action had a very clear aim of making officers bear the brunt of their hate.”

Mr Lindsay said the rioters achieved “nothing but misery and distress for residents in affected areas”.

PSNI chief constable Simon Byrne said his” thoughts are with our injured colleagues who faced shocking violence just trying to do their job”.

First Minister Arlene Foster said what happened was disgraceful. “Our thoughts are with the injured officers . . . A message must be sent that this is not acceptable.”

Alliance leader and the North’s Minister for Justice Naomi Long condemned the violence as “utterly intolerable”.