Politics and policing must be kept apart, says Frances Fitzgerald 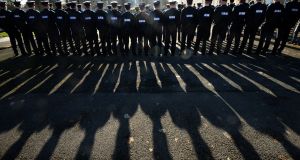 Tánaiste Frances Fitzgerald is understood to see human resources and how promotions are made within the Garda as a particular concern. Photograph: Dara Mac Dónaill

Tánaiste Frances Fitzgerald has indicated that the “root and branch” review of An Garda Síochána will seek to put greater distance between politics and policing.

In a round of meetings with Opposition spokespeople on Wednesday on the establishment of the new Government review into the force, Ms Fitzgerald also indicated structures that have been in place since the foundation of the State needed to be overhauled.

It is understood she was referring to how the senior level of the force is appointed and organised, which has remained unchanged since the formation of An Garda Síochána in 1922.

How senior officers in the force are appointed and held accountable is emerging as a key issue in efforts to reform An Garda Síochána.

The Government announced the new review of the force recently following the recent controversy over one million breath tests that never happened but were recorded in internal Garda systems.

Ms Fitzgerald is consulting with members of the Opposition to secure all-party agreement on how the Commission on the Future of Policing in Ireland will proceed. The Government hopes to have its terms of reference finalised in time for next week’s Cabinet meeting.

Sources said the prospect of putting the commission on a statutory footing was raised with Ms Fitzgerald, and her spokesman said this would be considered.

It is understood, however, that the Tánaiste did not give an indicative timeframe of when the commission would complete its work.

A number of sources said she raised the prospect of putting greater distance and clarity in the relationship between An Garda Síochána and the political system.

This includes giving a greater say to oversight bodies such as the Policing Authority and the Garda Inspectorate. For example, one source said Ms Fitzgerald mentioned how she is asked about minor operational matters relevant to An Garda Síochána in the Dáil and indicated such issues would be more appropriate for the Policing Authority.

Ms Fitzgerald is understood to have mentioned human resources and how promotions are made within the Garda as a particular concern.

Meanwhile, the issue was also discussed at a meeting of the Fianna Fáil parliamentary party on Wednesday evening. Mr O’Callaghan again outlined Fianna Fáil is not in a position to express confidence in Garda Commissioner Nóirín O’Sullivan.

He also said the party is working on a “strong” Dáil motion calling for reform of the Garda, but those present said he indicated it would not call for resignations in the force. Mr O’Callaghan said that if the Dáil went down that route, it would set a precedent that could see parliament seeking resignations of other public servants, such as Health Service Executive officials and teachers.

Separately, the Fennelly Commission into the taping of phone calls at Garda stations is expected to be published on Thursday.