Police petrol-bombed in Derry during operation against dissidents

September 9th, 2019: Eyewitness footage captures PSNI officers being petrol-bombed in the Creggan area of Derry while they were carrying out a security operation targeted at dissident republicans. Video: Freya McClements 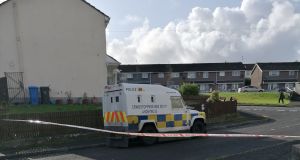 Police at Creggan Heights, Derry, on Monday after residents were evacuated when a suspicious device was found in a house. Photograph: Aoife Moore/PA Wire 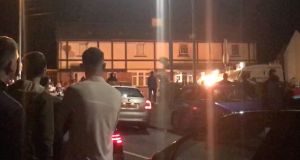 PSNI officers came under petrol bomb attack in the Creggan area of Derry on Monday night while they were carrying out a security operation targeted at dissident republicans in the wake of the Strabane mortar bomb discovery on Saturday.

Police said a number of homes were evacuated after a suspicious device was found in the Creggan Heights area of Derry. They said several missiles were thrown at police.

Up to 80 officers were involved in the security operation. Police appealed to parents to bring home their children, who were getting caught up in the trouble.

SDLP leader Colum Eastwood, appealing for calm said: “The brutal and sustained attack that officers have come under while trying to make our community safe is disgusting.

“Young people in this community are being manipulated and are risking their futures as a result. I would urge parents to contact their children and take them out of harm’s way.

“People in this community will not be held to ransom by those who want to hold us all back,” he added.

Referring to a number of houses being evacuated he said: “We recognise the upheaval this has caused and we are grateful for their co-operation and understanding.”

“The focus of this operation is ensuring the people of Creggan are safe. However it is concerning to see significant numbers of young people on the streets, late into the night, throwing petrol bombs and other missiles at officers in the area,” he said.

“The reality is this type of disorder contributes to the complexity of the policing operation and presents a real risk of injury to those involved. Already we have seen two incidents where young people have sustained burn injuries as result of engaging in disorder,” he added.

“We are grateful for the support of community representatives in helping to reduce tensions and providing space for officers to carry out the necessary work to ensure this object does not present a risk to the people of Creggan,” said Mr Hamilton.

Referring to the disturbances she added, “There is absolutely no justification for the actions which serve no purpose other than to put people at risk of serious harm and make the situation worse for local residents trying to get on with their lives and they should stop now.”

Meanwhile, police said a 33-year-old man arrested in connection with the Strabane incident was released after questioning.