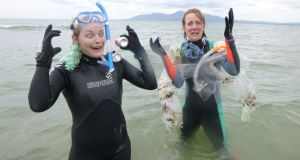 Governments on both sides of the Border should introduce a “deposit on return” system for drinks containers in order to reduce littering, the non-governmental organisation Coastwatch has said.

To mark World Ocean Day, Coastwatch published the results of its latest marine litter survey which found plastic bottles dumped in more than 83 per cent of the 525 shoreline sites, of 100m to 500m in length, surveyed.

The survey was conducted in autumn 2016, and found that plastic bottles were the “number one macro-litter item” on the island, closely followed by other drinks containers, lids and cans.

If the plastic bottles counted in the survey were “distributed evenly over the shore” there would be 36 for every kilometre of the Irish coast, it said.

“It would be a win win action, creating jobs and supports for refill and recycling, rather than down-cycling or incineration which is the standard fate of a mixed rubbish litter bag picked from the shore,”she said.

“There is a growing body of evidence on harm done by marine litter – especially micro-litter which is ingested by a wide range of marine life including life which we eat whole like shellfish,” Ms Dubsky said.

In a separate environmental initiative, a west Cork fisherman has devised a solar-powered navigation light which will allow him to return safely to shore during winter months.

The device is one of 153 projects approved for funding under the EU Fisheries Local Action Group (Flag) programme, announced by Minister for Marine Michael Creed in Ballycotton, Co Cork on Thursday.

Marine tourism, aquaculture and seafood development projects are also recipients of the funding which is administered by BIM on behalf of Mr Creed’s department.

More than 200 project applications were received under the scheme in seven designated coastal communities.