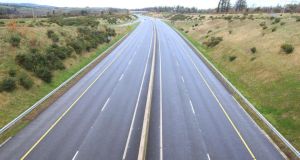 NUI Galway is critical of the “narrow” focus on road options

The N6 Galway City Transport Project was still receiving submissions by yesterday’s deadline, with most believed to be objections to routes running through residential areas.

NUI Galway (NUIG) has joined Galway Racecourse and other business interests in objecting to the detail.

The university is critical of the “narrow” focus on road options. It has called for light rail and other public transport options to be examined to resolve the city’s congestion.

There has been mounting opposition to the six road corridors unveiled several weeks ago by designers, with a quoted cost of between €500 million and €750 million and involving the demolition of between 30 and 120 homes.

All of the six road “corridors” lie south of the previous proposed outer bypass, which was abandoned after expenditure of €14 million on planning and legal advice.

Some 300 people have already received letters to say they could be directly affected. Other householders believe they could also face demolition but have not been notified. Almost 4,500 landowners, businesses and householders fall within the remit of the six “corridors”.

Hundreds of people have attended public meetings on the issue and a Galway N6 Action Group has been established.

NUIG says about €400 million has been invested in capital development on the university campus, which has a population of more than 20,000 students. It says that the university is “central to the life of the city and surrounding region” and one of the major employers.

It emphasises that expansion of its “unified campus”on the banks of the Corrib involved “decades of planning and forethought”.

Galway Chamber of Commerce has also said this week that the “negative impacts” of the road routes are “too great”.

It said that the six possible routes were “neither bypass nor orbital”, and the social impact on people and their homes was “not being properly addressed”.

A survey it conducted with NUIG found that more than 80 per cent of the city’s workforce depend on cars for transport. It is calling for more targeted initiatives to increase use of public transport.

He said the racecourse was not against a bypass per se, but it believed the designer, Arup, and the National Roads Authority would have to find an alternative.

Mr Moloney welcomed a motion passed at a special county council meeting earlier this week to send a delegation to Brussels to explore the possibility of reviving the old Galway city outer bypass project.