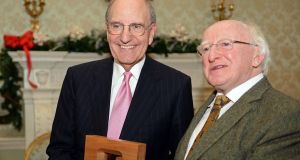 Mr Mitchell (82), who served in the Senate from 1980 until 1995 and was later US special envoy for Northern Ireland and then for middle east peace, will lead the annual March 17th display of Irish-American pride on Fifth Avenue, the St Patrick’s Day Parade Board of Directors announced on Monday.

The event draws more than 250,000 marchers and millions of spectators every year.

For more than two decades, event organisers have faced criticism for barring openly gay groups from participating, saying that doing so would run counter to the teachings of the Roman Catholic religion.

‘I look forward to it’

Mr Mitchell said by telephone he accepted the grand marshal post after being assured that the issues of inclusion for gay and lesbian groups “had been resolved. So I accepted and I look forward to it.”

Organisers last year allowed the first group of lesbian, gay, bisexual and transgender people to march in the event. This year they plan to allow two groups - returning marchers Out@NBCUniversal, affiliated with the parade’s television sponsor, and the Lavender and Green Alliance, whose application has been rejected every year since 1994.

City Hall officials did not immediately respond on Monday to questions about whether Mr de Blasio would participate this year.

A similar controversy has brewed for years in Boston, costing parade organisers there major financial sponsors and sparking a 2014 boycott by Boston’s first Irish-American mayor in 20 years.

Mr Mitchell, who oversaw negotiations that led to the 1998 Belfast Agreement in Northern Ireland, won the Presidential Medal of Freedom and the Liberty Medal.

“Senator Mitchell’s greatest achievement is the gift he gave to the people of Ireland - peace,” said John Lahey, a parade organiser and president of Quinnipiac University in Connecticut.