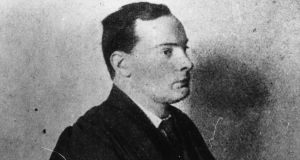 A typed version of a surrender letter from 1916 Rising leader Patrick Pearse has sold for almost €300,000.

It follows the abortive private sale of a more valuable handwritten version in Dublin last December.

Diarmaid Ferriter, professor or modern Irish history at UCD, described the latest sale as a “disgusting” example of how critically important historical State documents end up in private hands.

The “Order of Surrender” brought the 1916 Rising to an end. As many as 10 copies, about seven of them typed by the British army and signed by Pearse, are thought to be in existence.

Variations are held in the National Library of Ireland, in the Imperial War Museum in London and by private collectors, often unidentified, around the world.

The typed copy sold by Bonhams on Wednesday bears a tricolour stamp depicting William Allen, Michael Larkin and William O’Brien, the “Manchester Martyrs”, hanged for the killing of a police constable.

The successful bidder has chosen to remain anonymous but is understood not to be based in the UK or Ireland.

“How does this end up in private hands for profit? It’s disgusting,” said Prof Ferriter shortly after the announcement. “There is just too much ambiguity about all this. They are not documents that belong in private hands. Patrick Pearse is signing them in his capacity as a member of the provisional government.”

Last December, controversy surrounded a similar auction of a handwritten version of the letter at Adam’s auctioneers in Dublin. That document was ultimately withdrawn when bids peaked at €770,000 - considerably shy of its guide price of €1 million to €1.5 million.

Its anonymous owner applied for an export licence which was subsequently delayed by the Department of Arts for a period of one year, even though Minister Heather Humphreys had ruled out a State bid. The letter is currently on public display at the GPO.

“I think that’s what it’s worth,” said Adams director Stuart Cole of the latest sale. “It’s a justification of the importance of it as an historical document.”

Mr Cole said the letter his house had for sale last December was a unique document compared to Wednesday’s version, given the former was the final communication written in Pearse’s hand, bringing to an end fighting in the North Brunswick Street area of Dublin.

Its sale was provocative. During the auction, Sinn Féin councillor Mícheál Mac Donncha stood up to protest saying it was “one of the most important documents in Irish history”, before being led from the building.