Family expected documents would be submitted by Egyptian officials on Tuesday 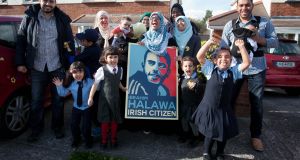 Paperwork formally confirming Ibrahim Halawa’s release from prison which was expected to be processed on Tuesday has been delayed by Egyptian authorities.

Ibrahim Halawa’s family were expecting to receive news the paperwork confirming Mr Halawa’s acquittal would be received by the Egyptian prison on Tuesday.

It has now been more than two weeks since an Egyptian court found the Irish citizen not guilty of all charges after spending four years in jail during his trial. Initially it was expected Mr Halawa (21) might be home in Dublin before the end of September.

Following the delays in the process, Minister for Foreign Affairs Simon Coveney has been in direct contact with Egyptian foreign minister Sameh Shoukry to “request his help in expediting the process”, according to a Department of Foreign Affairs spokeswoman.

Mr Halawa’s sister Nosayba is currently in Egypt but is reportedly finding it difficult to access information from authorities about when the formal release process will be completed.

“There remains a number of steps to be gone through before Ibrahim is able to depart Egypt, and the Irish authorities and Ibrahim’s legal representatives remain in ongoing contact with the Egyptian authorities on this process” the department spokeswoman said. “The Government remains focused on ensuring that Ibrahim Halawa gets home as soon as possible.”

Sinn Féin MEP Lynn Boylan, who has been in regular contact with the Halawa family throughout the case, said on Tuesday the family “were hopeful that the paperwork would be delivered to the prison today”.

The paperwork, which will be sent to the prison where he is currently being held, is also necessary to formally confirm Mr Halawa does not have any other outstanding warrants for his arrest in the Egyptian system.

“There has been a lack of concrete details about the process and the release from authorities” Ms Boylan said. “You would be worried about his mental health the longer he spends in prison after hearing he was acquitted.”

Mr Halawa, who comes from an Egyptian family, was born and grew up in Firhouse, Co Dublin. He was facing charges in Egypt relating to a 2013 protest in Cairo against the ousting of then president Mohamed Morsi of the Muslim Brotherhood.

Mr Halawa was arrested alongside his three sisters, Fatima, Omaima and Somaia, who were later released on bail and allowed to return to Ireland. All three sisters were tried and acquitted in absentia.

The mass trial of 494 defendants was adjourned 25 times over the course of the four years.

In late September, the Department of Foreign Affairs issued Mr Halawa a new Irish passport ahead of his return to Ireland.