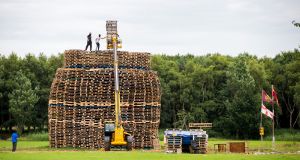 Masked men continue to build a bonfire at Inverary Playing Fields in Belfast. Police in Northern Ireland have warned their resources could be stretched amid growing fears of tension around the burning of Eleventh night bonfires. Photograph: PA Wire

Masked loyalists appear to have broken a court order banning them from extending an Eleventh night bonfire in Belfast.

The loyalists, wearing balaclavas and scarves over their faces, could be seen on Monday afternoon using a cherry picker to add wooden pallets onto the top of the bonfire at a site in the east of the city that is at the centre of a controversial court ruling.

However, on Monday at Inverary playing fields - one of the sites covered by the injunction - pallets were being added to the bonfire. Video and photographs taken by the Press Association shows piles of wooden pallets being lifted onto the bonfire and then stacked on top by two masked men.

Loyalists in east Belfast have been left angry by the court injunction.

The Northern Ireland Police Federation - the body representing rank-and-file police officers in the region - warned that police resources could be stretched amid growing fears of tension around the burning of the Eleventh night bonfires.

Federation chairman Mark Lindsay said he hoped “those involved are able to sort out outstanding issues”.

He warned: “What we don’t want is a drain on already stretched resources.”

Sinn Féin said they believe that all dangerous materials should be removed from the sites in the east of the city by police and the council.

However, unionists have accused the republican party of waging a “cultural war” on loyalists.

A joint statement from the Democratic Unionist Party (DUP) and Progressive Unionist Party (PUP) said there has been an attempt to “discredit” the Twelfth celebrations, and called for calm.

A prominent loyalist, former flag protester Jamie Bryson, warned it could prove difficult “to control young people” if action is taken to remove their bonfires.

Bonfires are traditionally lit in loyalist areas of Northern Ireland on the eve of the annual July 12th celebrations marking King William III’s victory at the Battle of the Boyne in 1690.

In recent years there has been concern over the size of the bonfires, many of which are built close to homes and businesses.

In Carrickfergus, a towering bonfire, which has been built in close proximity to a petrol station and along a main road, looks close to toppling over.

In Belfast, the City Council said it applied for an injunction amid concern over the size of the bonfires at Ravenscroft Avenue car park/Bloomfield walkway, Avoniel Leisure Centre car park, Inverary playing fields and Cregagh Park East.

Alliance and Sinn Féin councillors have claimed the application for the injunction was supported by all the political parties.

Sinn Féin councillor Jim McVeigh sparked anger within the unionist and loyalist community on Monday when he said his interpretation of the injunction was that the bonfires should not be lit and the material removed from the site.

“They are already too high, too dangerous and too close to public amenities,” he said.

Mr McVeigh claimed the council has a contractor to go onto the sites and remove bonfire material.

However, Belfast City Council would not confirm the claim.

In a statement, a spokesman for the council said: “We have a contractor who carries out work at numerous sites but we cannot comment any further due to a confidentiality clause.”

The spokesman said the injunction does not make any specific reference to the lighting of the bonfire.

“The council will review any information received - either directly or via the police - relating to any persons allegedly breaching the injunction, and will consider what further action is appropriate,” the spokesman added.

The DUP and PUP have called for a “cultural convention” to be held in the Autumn. In their statement they said this was “to ensure that the Unionist community can go forward with one voice in promoting our culture, heritage and tradition, as well as to ensure that our celebrations continue to be bigger, better and more successful than ever before”.

They added: “We must not let our unity of purpose be disrupted or harmed by the actions of those who want to devalue and demean us.

“It is our belief that this continued aggression by Sinn Féin and their continuation of a cultural war is a vain attempt to give their ageing leadership a legacy and to restore their credibility within their own ranks.”