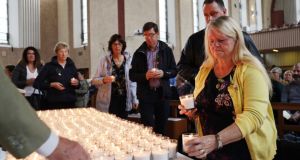 Members of the congregation place a candle on a table during the 34th Annual Irish Kidney Association Service of Rememberence and Thanksgiving held at Corpus Christi Church, Drumcondra to honour organ donors and their families. Photograph: Alan Betson/The Irish Times

The mother of cystic fibrosis campaigner and double lung transplant recipient Orla Tinsley has said her daughter is doing very well and is “living a life that she was never able to live before”.

Ms Tinsley, who is from Newbridge, Co Kildare but lives in New York, has spent years campaigning for better treatment for cystic fibrosis patients and has also been a strong advocate for the benefits of organ donation.

Mrs Tinsley and her husband Brian carried the Book of Remembrance inscribed with names of organ donors to the altar.

“Orla’s doing very well. She still has her cystic fibrosis of course but having new lungs has made a huge change to her life. I was with her a fortnight ago and we were able to walk down Broadway and up hills together, hills which were once mountains for her to walk up, now she can just walk up quite casually,” Mrs Tinsley told The Irish Times.

“She is living a life that she was never able to live before and she’s very happy.”

Ms Tinsley’s TV documentary Warrior, which aired in September last year, led to a surge in donor card requests, according to the Irish Kidney Association.

Mrs Tinsley said she “never expected” her daughter’s documentary to get such a big reaction.

“We never thought about what outcome it would have but I think Orla’s plan all the time was that it would encourage people to donate and it was always her plan to have this documentary shown whether she lived or died, that was very important for her,” she said.

Mrs Tinsley said it was “an honour” to be able to take part in this year’s Service of Remembrance and Thanksgiving.

“It was a very moving ceremony . . . to see all the people here that are parents of donors or partners. I spoke to a man whose wife died in a road traffic accident and she donated all her organs, a very young man with a small child, very moving,” she added.

Hundreds of people, including the families of donors and donor recipients attended the ceremony, as well as the Lord Mayor of Dublin Paul McAuliffe.

“This symbolic Service is a mixture of sadness and joy for the families of organ donors and transplant recipients alike,” the Irish Kidney Association said.

“For many donor families this unique Service has become an anniversary to both remember their loved ones, and for transplant recipients, the opportunity to honour and give thanks for the wonderful gift of life they have received.”