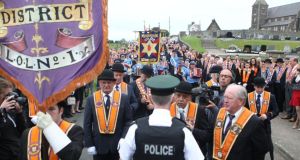 For the 19th year in succession Portadown Orangemen were barred from completing their annual Drumcree parade by marching down the nationalist Garvaghy Road in the Co Armagh town.

On Sunday, as they have done every Sunday since July 1998, police blocked members of Portadown Orange Lodge from making their return parade down the street.

In the mid-1990s and early 2000s the annual Orange march made Drumcree the scene of violence and sectarian tensions. Parades were forced down Garvaghy Road in 1996 and 1997, but since 1998 the march has been banned by the North’s Parades Commission.

Tensions have reduced significantly since then, although every Sunday a small group of Orangemen symbolically parade to a small police line at Drumcree, seeking to be allowed on to Garvaghy Road.

On Sunday Portadown’s district master, Darryl Hewitt, said Orangemen would not give up on their demand to parade down the road. “We will not be walking away from this place, and I can assure you that we will continue to work hard to achieve what we desire,” he said at Drumcree.

“We are only looking to complete a traditional parade and remember those who paid the supreme sacrifice for all in this community: the 36th (Ulster) and 16th (Irish) Divisions fought alongside each other,” he added.

Secretary of State for Northern Ireland James Brokenshire to disband the Parades Commission, which he said “have proved to be totally useless and are pandering to a hard-line republican agenda”.

“They must go, and the call from this place this afternoon is that the Secretary of State must show some mettle and, once and for all, sack the whole lot of them.”

He continued: “We attempt to complete our parade each and every Sunday – a fact that most people in Northern Ireland are not aware of. This has been the case since July 1998, when our late district master Harold Gracey said that we would remain on protest until our rights have been restored . . .

“Our resolve has not diminished over the weeks, months and indeed years. No one should be in any doubt: Portadown district are in this for the long haul. We will not be deflected from seeking to achieve our objective.”