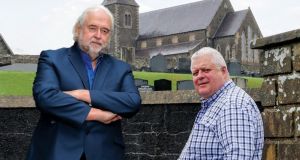 A Co Armagh businessman and former Orange Order member has recounted how during political reconciliation discussions an offer was made to remove the Irish Tricolour at Dublin Castle.

Ian Milne, who also was involved in secret discussions to try to resolve the Drumcree marching disputes of the mid-1990s, has explained in a new book how he was invited to speak at the Forum for Peace and Reconciliation in Dublin Castle in 2003.

Mr Milne, who runs an undertaking business in Portadown, Lurgan and Banbridge, as an Orangeman and unionist had been invited to address the forum.

Unionists were reluctant to address the forum, which was established by former taoiseach Albert Reynolds in 1994 and then reactivated in 2002.

According to a biography of Mr Milne, A Matter of Life and Death, written by Belfast-based journalist Ivan Little, the Government appeared prepared to go out of its way to ensure he spoke.

Mr Milne said that when he arrived at Dublin Castle in January 2003, he was approached with an “odd offer” by a man he took to be one of the caretakers.

“He asked me if I wanted him to take the Irish Tricolour down from the building. He told me he thought I wouldn’t want to do my talk under the Irish flag.

“But I said that the flag was the flag of his country and I was more than happy to go ahead with my talk. I said that it wasn’t always possible for me to fly my flag at home but that he should always make sure that his flag stayed up on the pole.”

Mr Milne said that inside the castle he found himself sitting beside then Sinn Féin president Gerry Adams. He said this happened after a Government representative told him she did not want to sit beside Mr Adams, whom she described as a “terrorist”.

“I asked her if she wanted me to sit between her and Gerry Adams, and she replied ‘Please do’.”

Mr Milne, based in Portadown, previously served in the Royal Ulster Constabulary and as a prison officer.

The book also tells the story of how he was a mediator in the behind-the-scenes efforts to resolve the annual Drumcree disputes that triggered great community tensions in Portadown and across Northern Ireland from the mid-1990s and into the 2000s.

Each year Portadown Orangemen marched to Drumcree church outside the town and returned via the nationalist Garvaghy Road.

Local nationalists objected to the return parade. Parades were forced down Garvaghy Road in 1996 and 1997, but since 1998 the march has been banned by the Parades Commission. Each week Portadown Orangemen make a token effort to be allowed “complete” their 1998 parade down the Garvaghy Road.

The book relates for the first time how Mr Milne tried for years to find a solution to the impasse over the contentious parade. It tells how he met senior IRA figures and also leading loyalist paramilitaries, including Loyalist Volunteer Force leader Billy Wright, known as King Rat, who was shot dead in the Maze Prison by the Irish National Liberation Army in late December 1997.

Mr Milne also tells Ivan Little how in his youth he was sexually abused by a man he trusted and how he almost took his own life in the middle of a financial crisis that threatened his business, which has since flourished.

He also recounts how he broke new ground as a Protestant funeral director by arranging funerals for Catholics in Portadown as well as for his own co-religionists. Once famously asked if he buried Catholics he replied, “Only if they’re dead.”

The book is available on Amazon.