Retired technicians, fire-fighters and logisticians are being asked to rejoin 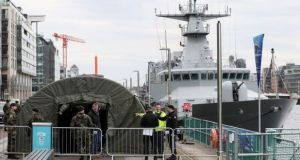 Defence Force members have helped set up testing centres and officer cadets have been taken out of training and tasked with helping to trace the contacts of those infected with Covid-19. Photograph: Brian Lawless/PA Wire

Emergency measures to allow retired Defence Forces personnel to re-enlist will only apply to those with specialist skills which could aid in the fight against coronavirus.

On Tuesday, Taoiseach Leo Varadkar announced emergency legislation, which will be voted on on Thursday, to allow former members to apply to re-enlist. The legislation has been planned for almost a year to address the retention crisis in the Defence Forces but has been fast-tracked in light of the current health emergency.

The announcement raised speculation that there would be a general programme to allow former members to re-join. However, the Department of Defence said the intention is to only allow those with specific skill sets to sign back up.

“The focus will be on filling posts which require specialised skills, where vacancies exist,” a spokeswoman said.

This include those with backgrounds in engineering, logistics, aviation, seafaring, fire-fighting and trades.

It is understood the Department of Defence is hopeful the collapse of the airline industry will make rejoining the Air Corps an attractive prospect for experienced technicians and pilots.

The exact numbers and skillsets required will be a matter for Chief of Staff Vice-Admiral Mark Mellett.

“The Chief of Staff will identify where such shortages exist and make recommendations to the Minister as to those that should be re-enlisted,” a Department of Defence spokeswoman said.

The programme will not apply to the Reserve Defence Forces but it is understood additional legislation may be passed in the coming weeks to allow former reservists to re-join.

Details of the plan are to be announced in the Dáil on Thursday. The Defence Forces has already received a substantial number of enquiries from former members about rejoining.

It intends to set up an online portal for members to apply to re-enlist.

The terms and duration for re-joining have yet to be decided on but it is understood personnel are likely to be offered a three-year contract. This mirrors the terms offered last year to former officers who were asked to re-join the Defence Forces.

The Defence Forces has already altered its force posture to support the HSE in combating the spread of coronavirus, also know as Covid-19. Members have helped set up testing centres and officer cadets have been taken out of training and tasked with helping to trace the contacts of those infected with Covid-19.

The department said these cadets will be paid a daily “Maintenance of Essential Service Allowance” amounting to € 48.26 a day.

The Department of Public Expenditure and Reform is also considering making funds available to pay cadets the “Military Service Allowance” of €100 a week which is usually only payable to officers who have completed training.

The Representative Association for Commissioned Officers said the Military Service Allowance “must be paid to cadets, recruits and apprentices for the duration of their deployment on active military service”.

“Cadets have been deployed on the front line in fighting the virus, conducting the crucial role of contact tracing since March 12. Their Cadet training has been suspended for the duration of the Covid-19 response. They will serve the State without question, and we must in turn look after them,” general secretary Conor King said.

1 ‘Frustrated and angry’: Thousands march in Dublin to protest death of George Floyd
2 Covid-19: Easing of restrictions ‘unlikely’ to be speeded-up
3 Coronavirus: One more death in Republic as expert warns house parties are ‘disaster’ for containment
4 Large gatherings reported throughout State on bank holiday
5 Couple injured in shooting incident at farm in Co Waterford
Real news has value SUBSCRIBE