Planned resurfacing would be a threat to wildlife, says broadcaster 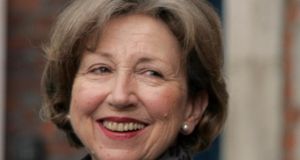 Journalist and author Olivia O’Leary: “Barrow towpath is a well-known, established amenity . . . It breaks my heart to think of them destroying it.” Photograph: Eric Luke

Well-known broadcaster Olivia O’Leary is leading a campaign to stop Waterways Ireland replacing the grassy towpaths along the Barrow Navigation in Co Kilkenny with a hard surface more suitable for walking and cycling.

“Think what it will do to the wildlife to have machines ripping up the towpath surface from Monasterevin to St Mullins,” she told a public meeting in Graiguenamanagh.

“What will that do to the otters in Ballynagrane. To the kingfishers in Tinnehinch Lock Lower?”

Ms O’Leary described the Barrow towpath as a “well-known, established amenity, a beloved soft grassy way for walkers and bikes, stunningly green and peaceful and beautiful and intimate”, saying “it breaks my heart to think of them destroying it”.

“My own two brothers cycle the line every day. And many cyclists from abroad went on Trip Advisor to give five-star reviews to the Barrow towpath cycle. What words did they use? ‘Peaceful, tranquil, quiet, undiscovered.’ We meddle with this at our peril.”

This would involve “putting down a layer of stone and rolling in crushed limestone to give a firm base for walkers and cyclists”, she told the campaigners, adding that it “weathers in nicely and is more visually pleasing than surface dressing or tarmac”.

Ms Nolan explained that the project arose from the Carlow-Kilkenny Leader programme commissioning a study on the feasibility of developing the Barrow Navigation towpath as a cycle track, similar to the successful Great Western Way in Co Mayo.

It had now moved on to carrying out an environmental impact assessment, with a view to Waterways Ireland – as owner of the navigation – seeking planning permission for the project early next year, or perhaps even as soon as Christmas.

Save the Barrow Line campaign

“The grassy towpath of the Barrow waterway is to me the most beautiful place on God’s earth,” she said.

Environmentalist Dick Warner, who put the Barrow Navigation on the map with his television series on Ireland’s inland waterways, has called the stretch between Graiguenamanagh and St Mullins “perhaps the most beautiful riverside walk in these islands”. He is opposed to the hard surface and says the faster traffic it would facilitate would be a real deterrent to wildlife – “especially otters, who will leave a place and never come back if disturbed”. The plan was “a real threat to this wild place”, he said. savethebarrowline.com