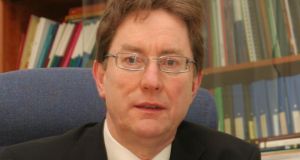 NUIG president Jim Browne: Said he “led and pushed” the move in 2013, despite “genuine concern at governing authority level” that such an affirmative action programme could be challenged. Photograph: Aengus McMahon

Dr Browne said it was “recognised” back in 2009 that the university had a problem, when only one of 17 people promoted to senior lecturer roles was a woman. It had taken steps since then to improve the situation for female staff.

As a result, the governing authority had agreed to a quota system, where one-third of all promotional places would go to women in the 2013-2014 promotion round.

He said he had “led and pushed” the move in 2013, despite “genuine concern at governing authority level” that such an affirmative action programme could be challenged. “We got legal advice that it was probably okay . . . so we went out on a limb on that.” In the event, 39 per cent of female candidates were promoted and quota implementation was not required.

“It is still not where we’d want to be, we’d like it to be 50-50,” Ms Loughnane said. “We intend to achieve is equality of opportunity over a series of rounds.” She added that “so much of what is being debated and discussed now” related to the 2008-9 period which was an acknowledged “low point”.

The recent Equality Tribunal ruling in favour of Dr Micheline Sheehy Skeffington related to the 2008-2009 promotion round.

A Government ban on promotions was in place from 2010 to 2013, she pointed out. In the interim, the university commissioned a report on the senior lecturer promotion scheme from Prof Liz Doherty, emeritus professor of human resource management at Sheffield Hallam University.

Changes put in place as a result included the affirmative action programme and gender awareness training for every promotion board member.

“Up to then, teaching, research and contribution were weighted equally, but under the changes we allowed applicants to weight those elements differently,” Dr Browne said, “so if a person felt that they were stronger on teaching than research, they could do that.”

Rankings and decisions were made by academics and there was “no question of suits in management coming along and saying that person should be promoted”.

The university says it cannot comment on its current appeal of a separate Equality Tribunal ruling in favour of academic Mary Dempsey and cannot comment on legal actions initiated by four female lecturers who were turned down in the last two promotion rounds.

Dr Browne rejected criticism by the Irish Federation of University Teachers and Siptu of the new gender equality task force, which NUIG established earlier this year as a result of the recent Equality Tribunal ruling.

The aim was to establish a group which had “complete freedom and independence”, but was “not representational and carrying a flag” for one particular grouping, he said. The task force wrote its own terms of reference and its chairwoman, Prof Jane Grimson, had the right to co-opt members.

A gender equality expert, Prof Pat O’Connor of the University of Limerick, had had been invited to contribute in an advisory capacity, he said.

The university expects to hear from the Higher Education Authority by the end of May its request that the Irish Human Rights and Equality Commission carry out an equality review of the entire higher education sector.