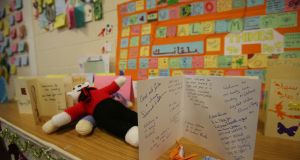 Toys and cards from local school children in a welcome centre at an undisclosed location in Belfast which will provide temporary accommodation for the first group of Syrian refugees to resettle in Northern Ireland. Photograph: PA

A group of 51 Syrian refugees have arrived in Northern Ireland and are being looked after at a welcome centre in Belfast.

The first group of refugees to be catered for in the North under the British government’s vulnerable persons relocation scheme landed at Belfast International Airport on Tuesday afternoon, having flown in from Beirut.

They comprise 10 Muslim and Christian families ranging in ages from a baby just a few weeks old to people in their forties. Most had been based in refugee camps in the Lebanon. Eleven of them are aged under five. The United Kingdom is taking in 20,000 refugees over the next five years.

The 51 refugees were brought to a welcome centre in Belfast, which is not being disclosed in order to maintain their privacy. In the coming days the families will be housed at locations in south, north and west Belfast.

A second group of about 50 refugees will arrive in the North in the new year and will be housed in the northwest.

The refugees were greeted by a reception committee at the airport and then brought to the Belfast welcome centre where they were given a meal and shown their living quarters for the next few days.

In the centre a Christmas tree has been erected, toys have been laid out for the children and scores of cards have been put on display from people all over Northern Ireland welcoming the refugees. They have been written in languages such as Arabic, English, Irish, Polish and Chinese.

The arrivals had to undergo prior security screening before they were accepted on to the relocation scheme. Each family is assigned a special a key worker to assist them while interpreters are also on hand to aid them.

Most speak Arabic, but have poor English.

English classes are being provided for the families.

While the vast majority of people have been welcoming, a group calling itself the Protestant Coalition staged what called an anti-refugee rally just over a week ago in Belfast. But it attracted a small gathering of about 25 people.

Assurances have been given that the refugees will not be housed in areas where there is a “high risk of race hate”.

“They can count on our continued support and encouragement in what has been a turbulent and traumatic time for all of them. The people of Northern Ireland do not just offer somewhere to live but the promise of a future full of hope,” he said.

Mr McGuinness said people would “open their arms and hearts” to the refugees. “Today starts a new chapter in their lives and we all must play an active part to make sure they feel welcome, accepted and valued. I appeal to all our people to act kindly and compassionately and help rebuild and restore their faith in humanity,” he said.