Romanticising the Troubles contributes to the risk of a return to violence, experts warn 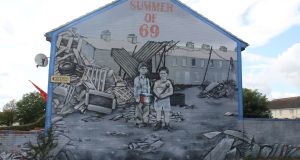 Murals in Republican and loyalist areas can give a one-sided view of the conflict, anti-terrorism experts say. Photograph: Ronan McGreevy

Romanticising the Troubles in Northern Ireland is contributing to the risk of a return to violence, experts have warned.

Some 40 per cent of people in Northern Ireland are under the age of 25 and have no memories of the Troubles which ended in most cases before they were born.

This is leading to “loss of memory of harm” with young people being prone to a one-sided view and a romanticising of the conflict.

The warning is contained in a paper by Prof Mark Brennan and Prof Pat Dolan who are co-founders of the global network of Unesco chairs on children, youth and community. They specialise in the study of violent extremism worldwide.

The paper, commissioned by Senator Mark Daly of the All Party Joint Committee on the Implementation of the Good Friday Agreement, also features Michael Ortiz who was appointed by the Obama Administration to act as an expert on countering violent extremism (CVE).

Professors Brennan and Dolan observe that after violent conflicts, people find it difficult to talk about the things that happened because of personal trauma.

They warn that this can “unintentionally act in favour of those who would prefer to give youth (and particularly vulnerable and impressionable young people) a false, almost romantic, retrospection of the past up to and including a very sectarian analysis.

“This can take the form of only seeing harm as occurring from one side and caused by enemies. This in itself and alone is a very real legacy risk from the Troubles.”

It also says many of the North’s murals depict a “jaundiced version of history that is not fair or objective and again for vulnerable youth this creates a serious risk in terms of their turning to violence towards those who are of a different religion, or living in a different community”.

The pair observed that young people in Northern Ireland are more ethnically isolated than their parents’ generation and live in more segregated localities with less diversity - an environment they warn is “ripe for fostering extreme beliefs, actions, and violence”.

They also note the continued lack of integration in education in Northern Ireland.

“The reality remains unfortunately that young people are (with noteworthy exceptions) not educated together.”

While the older generation believe they are living in a post-conflict society, young people have no such feelings.

Both sides in the Troubles have been accused of glamorising violence in recent days with the Apprentice Boys having to apologise for a flute band which wore the emblem of the Parachute regiment on their uniforms in Derry last week while Republican youths at a Wolfe Tone concert were heard singing IRA slogans.

“All indications are that without direct efforts to engage youth and citizens of all backgrounds, there will also be a return to violence in the event of a rushed Border poll on the island of Ireland. The only question in both scenarios will be the scale of the violence”.

Mr Orviz said there was an urgent need on the part of the British government to set up a national-level task force involving politicians, police and civil society leaders to examine potential threats and to understand the drivers of violent extremism.

This would lead to a national strategy to deal with the potential for violent extremism with a view to establishing a government agency to deal with it.