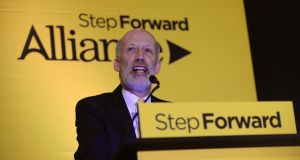 Former Alliance leader David Ford: before the dissolution of Stormont he was planning to introduce a private Bill that would allow abortion in cases of fatal foetal abnormality. Photograph: Arthur Allison

There were 16 abortions carried out in Northern Ireland hospitals in 2015/2016, the same number as the previous year, according to the North’s Department of Health.

Abortion is legal in the North when there is a threat to the life of the woman or a risk of a serious and adverse effect on her physical or mental health.

The department said it should be noted that, due to the small numbers of abortions, relatively large fluctuations can expected from year to year.

The 1967 British abortion Act does not apply in Northern Ireland. It is estimated that about 1,000 women from the North travel to Britain annually for abortions under the Act.

Before the dissolution of Stormont and the calling of elections for March 2nd, the former Alliance leader, David Ford, was planning to introduce a private Bill that would allow abortion in cases of fatal foetal abnormality.

He said that if re-elected for South Antrim he would resubmit his Bill.