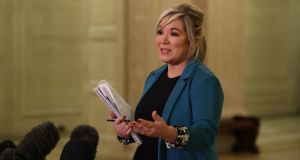 The North’s Executive is to meet on Sunday night to discuss concerns over an “aggressive new strain” of Covid-19.

The Deputy First Minister, Michelle O’Neill, tweeted on Sunday afternoon that ministers would meet at 9pm.

It follows calls by four of the five parties in the North’s Executive for an urgent meeting of ministers.

In a joint letter to the North’s First and Deputy First ministers, ministers from Sinn Féin, the SDLP and the Alliance party called for the Executive to meet later on Sunday

“The speed and scale of the virus transmission spread and the fact that it is so fast-moving is a cause for alarm to us all,” they wrote.

“While our Executive met last Thursday and moved to take decisions ahead of others, it would be prudent for the full Executive to be briefed by the Minister of Heath and the chief medical officer and chief scientific officer at the earliest opportunity.

“We must satisfy ourselves that our regulations and restrictions over the Christmas period and those agreed over the coming six-week period are sufficiently robust enough to safeguard public health in the context of these latest developments,” the letter said.

It is understood the Minister for Health, Robin Swann, has also written to the First and Deputy First Ministers requesting an urgent meeting.

The North’s Department of Health said on Sunday that 13 more people with coronavirus have died, bringing the total number of fatalities to 1,196. A further 505 people tested positive for the virus.

The Executive will meet at 9pm tonight

A statement issued by the Executive Office late on Saturday urged people in the North to limit Christmas gatherings to December 25th only because of concerns over the new strain of the virus.

There has been no change to the rules which permit the gathering of up to three households between December 23-27th.

In London and the south east of England plans to relax the rules on indoor gatherings at Christmas have been cancelled, with the region put under strict lockdown in a bid to halt the spiralling increase in cases.

In the rest of England, as well as Scotland and Wales, the five-day Christmas relaxation has been cut to just Christmas Day, and Scotland has banned travel to the rest of the UK.

The North’s Minister for Health said the variant strain of Covid-19 spreading in parts of England was a matter of “serious concern”.

“It is a rapidly evolving situation and we are liaising with colleagues in GB as it progresses,” he said.

Northern Ireland is due to enter a new, six-week lockdown from midnight on Christmas Day.

The North’s First and Deputy First Ministers and Minister for Health met with the Northern Ireland Chief Medical Officer and Chief Scientific Adviser following the announcement on Saturday to discuss the “rapidly unfolding situation”.

Ms Foster said they had a “detailed discussion about the situation in Northern Ireland”, and urged people to “carefully consider their plans so they are as safe as possible.”

The Deputy First Minister, Michelle O’Neill, said earlier they would keep the situation “under very close review” and would “continue to be guided by the advice of our scientific and medical experts.”

Christmas bubbling arrangements, she said, were in place “for those who feel they need to come together.

“If you must avail of them, then please consider doing so for one day only, Christmas Day. Keep your bubble as small as possible and meet for the shortest amount of time you can,” she said.

The SDLP leader Colum Eastwood said “decisive action” was “needed quickly. If we need to act to slow the spread of this deadly virus, then we need to act now.”

Given the changes happening across the British Isles, Naomi Long said, the Executive needed to meet on Monday “to provide clarity for families, particularly those planning to travel to form bubbles. People need answers urgently,” she said.

Another 17 people with coronavirus died in Northern Ireland on Saturday, according to the North’s Department of Health. It brings the total number of fatalities to 1,183.

A further 640 people tested positive for the virus. In the North’s hospitals, 427 people with Covid-19 are receiving treatment, with 30 in intensive care.